Discover the story of Jewish life in the UK from the Norman conquest to the 21st century.

The collections include particularly rare items within the Designated collection of Jewish ceremonial art, which is considered among the finest in the world. Highlights include a 16th century Venetian synagogue ark and magnificent silver Torah ornaments from the Great Synagogue in Duke’s Place, City of London, destroyed during the Blitz.

Explore what’s on offer in our new Research Centre.

Explore objects from our collection through our online exhibition, Jewish Britain: A History in 50 objects or using the search box below.

Find the list of audiovisual material available in our reference collection on the London Screen Archive’s website. Explore documentaries, interviews and recordings which relate to the history, identity and culture of Jews in Britain.

We hold regular events and workshops which highlight objects from our collection.

You can also discover the story behind an object in our regular ‘Spotlight Spiel’ talks where you can hear from our volunteers as they put a different object under the spotlight.

For a viewing appointment contact a member of our curatorial team at [email protected].

Object Donations: If you are considering donating an item to the Museum, please complete our donation offer questionnaire and email it to [email protected]. 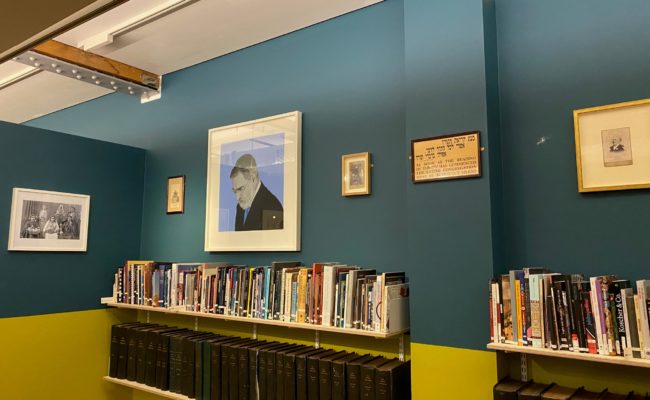 For the first time the Museum is making its substantial research library of over 2,000 books available to the public including bound copies of the Jewish Chronicle dating back to 1884. This new space encourages researchers to use the collection with the ability to book a research desk and request objects from the over 40,000 items in the Museum’s catalogue in advance.

END_OF_DOCUMENT_TOKEN_TO_BE_REPLACED 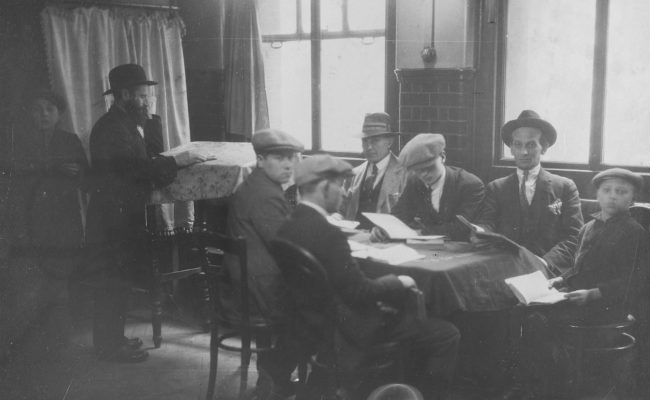 Jewish Britain: A History in 50 Objects

Jewish Britain: A History in 50 Objects showcases highlights from the collections of the Jewish Museum London.

END_OF_DOCUMENT_TOKEN_TO_BE_REPLACED 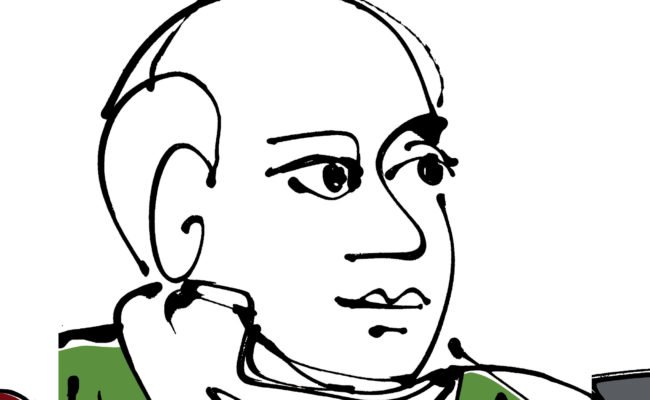 Jewish Lives is a project telling the stories of remarkable Jewish men and women who helped to shape British society.

END_OF_DOCUMENT_TOKEN_TO_BE_REPLACED 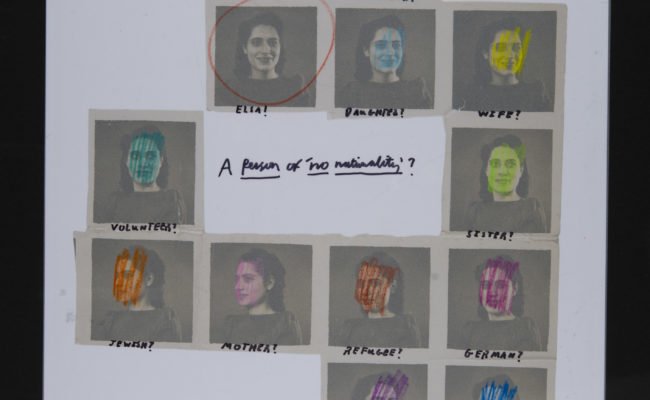 Your Legacy and Me is a project exploring the legacy of the Holocaust, created by young ambassadors from the Holocaust Educational Trust.

END_OF_DOCUMENT_TOKEN_TO_BE_REPLACED

We have one of the world’s finest collections of Judaica, featuring objects used in all areas of Jewish religious life, in both the public and private spheres. In addition to ceremonial art made in Britain over the past 300 years, we also display objects originating in communities throughout Europe as well as the Middle East and north Africa.

A significant part of our synagogue art collection includes silver Torah decorations such as scroll cases, rimmonim (finials), breastplates and pointers, which emphasise the exquisite quality of English and European silver.

Our collection of ceremonial objects used in the private sphere includes those used by Jewish individuals and families in everyday life, in life cycle ceremonies and during the Sabbath and festivals. Significant festival-related pieces include our range of Hanukah lamps and Scrolls of Esther for Purim.

Jews first settled in England in 1066 and there were Jewish communities in many towns in the medieval period. However, in 1290 Edward I expelled the Jews and there was no official Jewish settlement in England until readmission under Oliver Cromwell in 1656.

This new community quickly put down roots, becoming steadily more established until the late 19th century when it increased rapidly with the arrival of some 150,000 Jewish immigrants from Eastern Europe.

Many of the newcomers settled in London’s East End, which became home to a vibrant cultural and religious life.

In the 20th and 21st centuries Jewish people from many countries have migrated to Britain and today the diverse community continues to play a significant role in British life.

Our social history collection is made up of objects, documents and oral histories charting the many stories and experiences of British Jewish life. It highlights the experience of migration and the challenges faced in building a new life in a different country.

Barmitzvah robe: Robe worn by Michael Issacharoff at his barmitzvah in Bukhara, 1933.

During the 1930s the situation for the Jews of Europe under the Nazis became increasingly difficult and many people tried to leave. Between 1933 and 1939 around 70,000 of these refugees were admitted to Britain, including 10,000 unaccompanied children who came on the Kindertransport. Following World War II some Holocaust survivors came to Britain to try and rebuild their shattered lives.

The museum collects objects, documents, photographs and oral testimonies in order to record and preserve the experiences of refugees from Nazism and Holocaust survivors. One of our most important collections relates to Leon Greenman, OBE, an English-born Auschwitz survivor who devoted his life to speaking about his experiences and campaigning against racism until his death in 2008.

We are proud to hold one of the world’s most extensive collections of prints and drawings relating to Jewish life, built around the collection assembled by Alfred Rubens, one of the museum’s founders. We have over 2,000 pieces dating from the 15th to the 20th centuries.

The prints show images of Jewish life and personalities from across Europe as well as antisemitic cartoons, 19th-century English political caricatures, beautiful Jewish costumes from around the world and even an etching by Rembrandt!

We also have a notable collection of works by Pre-Raphaelite artist Simeon Solomon and some high quality paintings by artists such as Thomas Hudson, Tilly Kettle, Solomon Hart and Abraham Solomon. These include portraits of distinguished members of the community, in particular early rabbis of the Great Synagogue who effectively acted as Chief Rabbi of England.

Political cartoons: Satire on the visit of the Dukes of Cumberland, Sussex and Cambridge to the Great Synagogue, Duke’s Place on 14 April 1809.

Portrait of Algerian Jewish woman: after original by Duverger, around 1843

The largest category of images in our photographic archive are black and white photographs of Jewish life in London dating from the 1900s to 1940s.

The archive also reflects the origins and traditions of immigrants from Eastern Europe, refugees from Nazism and immigrants from the Sephardi diaspora across the Middle and Far East, including Iraq, Iran, Aden and India.

We also actively photograph a wide range of aspects of British Jewish life today, bringing the photographic archive right up to date.

This collection, previously housed at the Jewish Military Museum in Hendon, focuses on the stories of individual Jewish men and women who have served in the British Armed Forces for over three centuries.

Curators Roz Currie and Sarah Fairhurst have integrated over 50 objects from the Jewish Military Museum’s collection into the Jewish Museum’s permanent galleries enhancing the displays with exciting new stories and bold images.

Key objects on display include:

Over 1,200 objects from the Jewish Military Museum collection have been digitized as part of the We Were There Too project. We Were There Too is a unique cross community project created to capture, record and preserve the impact, experience and contribution of London’s Jewish communities during the First World War era. 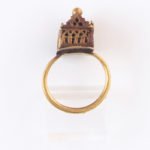 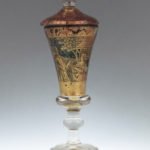 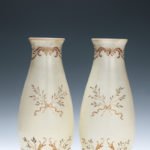 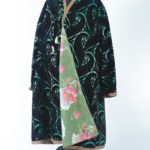 Barmitzvah robe: Robe worn by Michael Issacharoff at his barmitzvah in Bukhara, 1933. 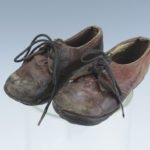 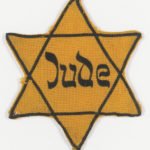 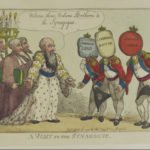 Political cartoons: Satire on the visit of the Dukes of Cumberland, Sussex and Cambridge to the Great Synagogue, Duke’s Place on 14 April 1809. 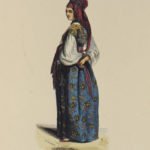 Portrait of Algerian Jewish woman: after original by Duverger, c.1843 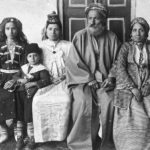 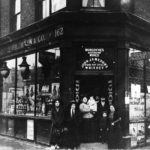