Bevis Marks Synagogue is the oldest synagogue in the United Kingdom. Built in 1701, it was the first purpose-built synagogue erected in England after the resettlement of 1656. The Grade 1 Listed Building is of exceptional historic interest; the fittings are remarkably complete and little altered from its original arrangement. Its intact Wren-style interior makes it a significant part of the historic landscape of London. As a result of being the oldest synagogue in continuous use in Europe, if not the World, the S&P Sephardi Community’s collection, intangible Sephardi heritage and archive, provide a uniquely uninterrupted record of Jewish life in Britain. 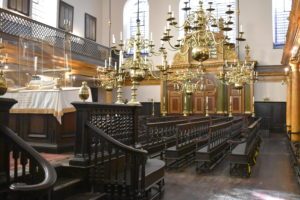 Interior of the synagogue today

The collection comprises ritual silver and textiles, Torah scrolls, prints, paintings, dating back to the 1660s. The collection has immense value as a whole: the complete nature of community acquisitions since 1656 offers a rare insight into the changing fashions and craftsmanship of London and, due to the mercantile nature of the community, further afield. 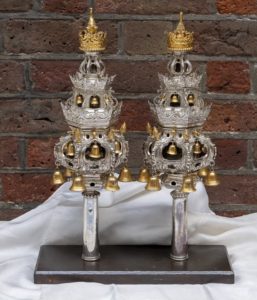 This is an is an example of the wonderful collection of 18thc Torah Finials or Rimonim, used to decorate the Torah scrolls in the synagogue. These will be shown in the new display in the vaults of the synagogue. English parcel-gilt silver Torah finials, Abraham de Oliveyra, London, 1737. Born in Amsterdam, he relocated to London in the 1690s. Made for Bevis Marks synagogue soon after opening.

The archive, partly stored at the London Metropolitan Archives (LMA), offers a unique insight into life in the City of London, the acceptance of nonconformist religion in England, the growth of the Anglo-Jewish community (including records of new branches established in Britain’s colonies), as well as a wealth of unique genealogical records. 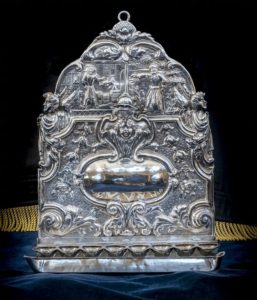 English silver Hanukah lamp, Samuel Edlin, London, 1712. One of three earliest known English Hanukah lamps. The biblical scene of Elisha and the widow pouring oil may be an allusion to a particular family or individual. Samuel Edlin became free of the Goldsmiths’ Company in 1701, entering his first and second marks in 1704, and a Liveryman in 1712. He is recorded at the corner of St Mary Axe, close to Bevis Marks, between 1712 and 1714, later moving to Wood Street in the 1720s and Old Bailey in the early 1730s.

The S&P Sephardi Community (S&P) also has a rich intangible heritage, ‘the minhag’, passed down from generation to generation since its establishment in 1656. 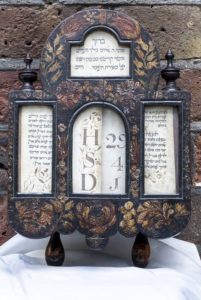 Painted wooden homer board, 18th century used to mark the days between Passover and Pentecost with a Hebrew blessing in the centre.

These melodies, dress and customs are a unique blend of Jewish traditions and English fashions, and are completely distinct, having little in common with either the Ashkenazi or the North African/Eastern Sephardi communities. To summarise, Bevis Marks represents an ancient but living tradition, a powerful mix of historic fabric and story. 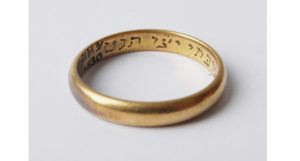 Ring used in a marriage ceremony at Creechurch Lane . From the British Museum’s Collection. The inscription records that Joshua and Judith Sarfaty were married in 1699. They married in London on 13 April 1699. Their names are listed among the Ketubot at Bevis Marks: Joshua de Netanel Sarfaty & Judith de Joseph Franco Sirano. (Married) 14 Nisan 5459.

Why did they come and where from?

But it all began somewhere else. Services at a small synagogue in Creechurch Lane, almost like a private house, date to 1657 and in October 1663 it was visited by the diarist Samuel Pepys, who recorded his impressions of the service. We know Pepys also visited in December 1659, on the occasion of a memorial service for a wealthy and respected merchant. 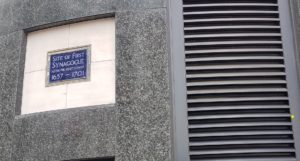 This plaque, marking the first synagogue, is on Cunard House at the corner of Creechurch Lane and Bury St in the City of London.

This makes the Spanish and Portuguese settlement one of the earliest after the readmission of the Jews to England, which is dated to 1656 and attributed to the petitioning of Oliver Cromwell by Sephardic Rabbi Menasseh Ben Israel of Amsterdam, acting as a Jewish ambassador. By 1690 there are thought to be only four hundred Jews living in England, so these first Sephardi’s were pioneers. 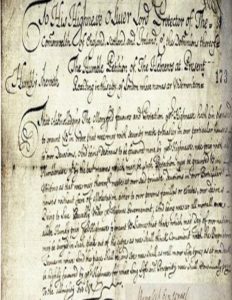 The synagogue, which had subsequently become a workhouse, was demolished in 1857. Originally, the group who met at Creechurch Lane, who were mainly merchants, were seen as ‘Spaniards’ and ‘Catholics’, but they held prayer meetings at Creechurch Lane and were soon accepted by the government as Jews in their faith. 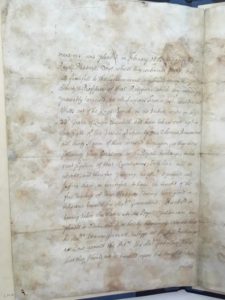 An increase in the number of Sephardic Jews made it necessary to find somewhere larger, and the planning of a new synagogue began, with an agreement being signed in 1699 with Joseph Avis, a student of Sir Christopher Wren, for the construction of the building to cost £2650.

The Spanish and Portuguese Jews who formed the Bevis Marks Community were part of a rich picture of migration to the UK which precedes the British Empire. Many were likely to have been merchants seeking safety and stability without fear of persecution. 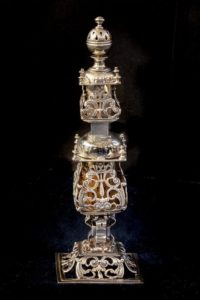 Spice Box, silver, Dutch, 1680. The donor of this piece was from one of the oldest Sephardic families in England. Isaac, alias Lorenco Rodrigues Lindo, was recorded in 1653 in the Canary Islands, the son of João Rodrigues Lindo, of Compomaior, Portugal. A secret Jew and nephew of Antonio Carvajal, the founder of the London Community, Isaac was imprisoned in 1656 without charge in the secret cells of the Inquisition, but was released after two years. In 1675 he settled in London, dying in 1712. His son Elias (d. 1728) was one of the first 12 Jews to be permitted to practice as a sworn broker in the City, on the payment of £1,500.

The interior décor, furnishing and layout reflect the influence of the great Portuguese synagogue of Amsterdam of 1675. Despite a fire in the 18th century when, the roof was destroyed and subsequently replaced, the London blitz and an IRA bomb nearby, the synagogue remains almost unchanged since its first building in the late 17th century. 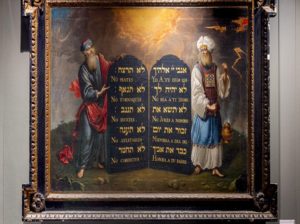 Moses, Aaron and the Ten Commandments inscribed in Spanish. This painting hung over the Ark in the Creechurch Lane Synagogue. Oil on canvas, Aron de Chavez, 1675.

The Jewish faith is remarkable for the continuation of religious practice. The services at Bevis Marks today would still be recognised by the pioneering Sephardic Jews, even though today’s community is made up of both descendants and also Jews of other backgrounds.

Take a closer look at the collection 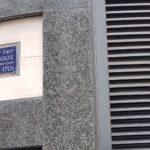 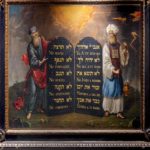 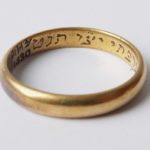 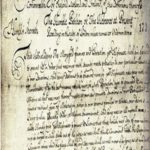 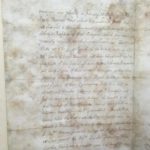 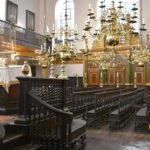 Interior of the Synagogue 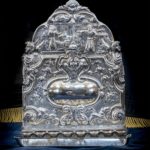 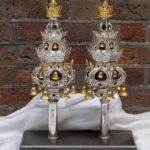 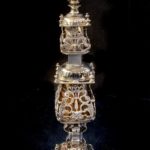 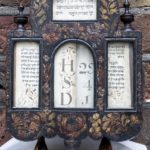 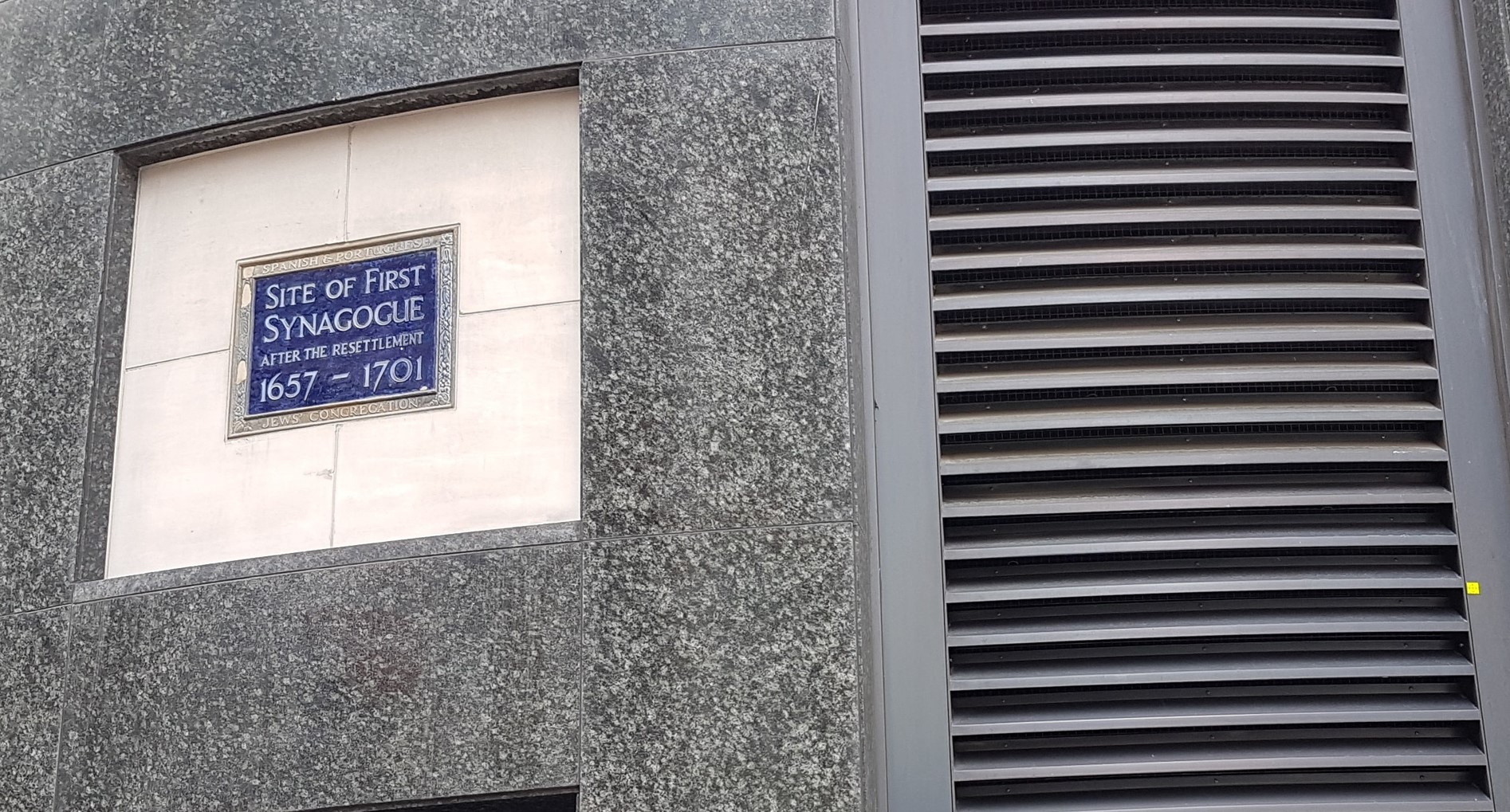 Explore more of the Exhibition 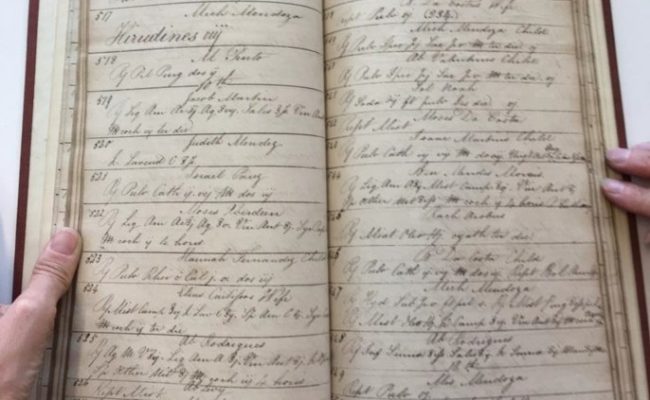 Gallery 2: Bevis Marks and the City. Integration and Acceptance

Bevis Marks has always looked outside of itself.

END_OF_DOCUMENT_TOKEN_TO_BE_REPLACED 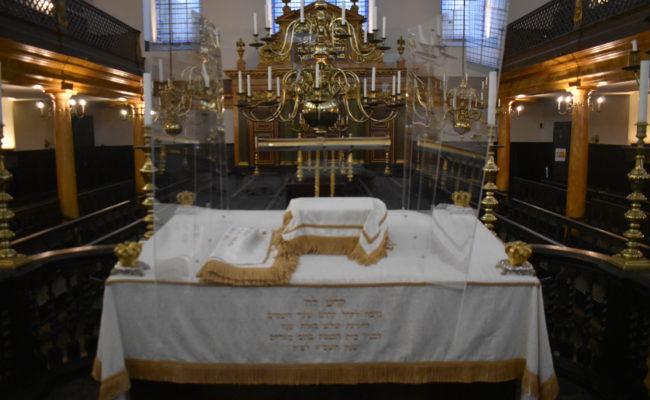 Return to the Exhibition Home Page