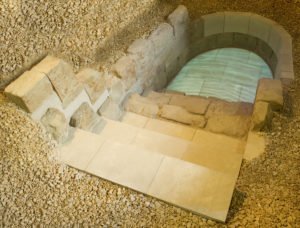 Set against a spacious and modern architectural backdrop, the Jewish Museum London reflects the vibrancy of Jewish history and culture in Britain. Four permanent galleries, show films, objects, photography and hands-on exhibits, including an evocative recreation of an East End London street and tailor’s workshop.

This medieval ritual bath is the starting point for the stories that are told throughout the museum displays.

A medieval Jewish community existed in England from 1066 until its expulsion in 1290. This mikveh was discovered on a building site in the City of London in 2001. It was built in the home of the Crespin family, members of the Jewish community that lived in the area during the medieval period. It may have been used by the family in private worship or in preparation for public worship. 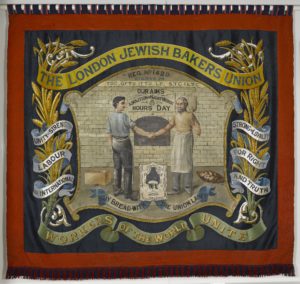 The mikveh not only demonstrates the long history of the Jewish community in England, but also the survival of religious tradition.

Mikvehs are used most commonly by observant married women after their periods and the birth of a child. Men may use it before the Sabbath and religious festivals. It is also used in preparation for marriage and the final stage of converting to Judaism.

The ground floor features key objects from the collections, including a painted banner from the London Jewish Bakers’ Union.

This stunning gallery showcases the museum’s outstanding collection of Jewish ceremonial art and explores Judaism as a living religious tradition.

The museum’s Judaica collection is one of the finest in the world and has been awarded Designated status by the Museums, Libraries and Archives Council, in recognition of its outstanding national importance.

An insight into British Jewish history from 1066 to today featuring interactive and thought-provoking exhibits.

This gallery tells the stories of Jewish people who have come here from areas as diverse as Eastern Europe, India and the Middle East – and how they have become part of British life.

Highlights include a recreation of a Jewish East End street, an interactive map exploring the history of Jewish settlement around the UK; and poignant displays relating to refugees from Nazism, including the 10,000 unaccompanied children who came to Britain on the Kindertransport.

There are fun and engaging activities for visitors of all ages, including a great migration board game and Yiddish theatre karaoke.

This intimate gallery tells the story of Auschwitz survivor, Leon Greenman OBE. Born in the East End of London, Leon was living with his family in the Netherlands when war broke out. Unable to prove their British nationality, the Greenmans faced a similar fate to their fellow Jews across Nazi-occupied Europe. Leon’s wife and son were murdered at Auschwitz. He survived six concentration camps and until his death in 2008 spoke to thousands of young people as a witness of the Holocaust, delivering a powerful message against racism.

The gallery displays many of Leon’s family possessions, including his wife’s wedding dress and his son’s toy, accompanied by a poignant film of Leon talking about his experiences.

It also features filmed testimonies from four Holocaust survivors who have also settled in Britain – Solly Irving, Jack Kagan, Josef Perl and Mala Tribich. Their experiences highlight the devastating impact of Nazi occupation for Jewish families across Europe, and the tremendous courage shown by those who survived.

The Holocaust Gallery is funded with support from The Conference on Jewish Material Claims Against Germany.