The wait is finally over! Many objects from the Jewish Military Museum have now been installed into the History Gallery at the Jewish Museum.

This is something we at the JMM have been working towards for over 18 months and it was so exciting to see it finally come together.

After months of research into our collection and detailed discussions with the Jewish Museum curatorial team, the JMM objects to go on display were selected. This was a difficult task as we needed to ensure the JMM’s items told their own story, as well as complementing those already on display. Decisions had to be made about which Jewish Museum objects should be removed from cases and which JMM objects could better tell a particular story. Finally, designers, conservators and contractors were appointed and work began on the installation. 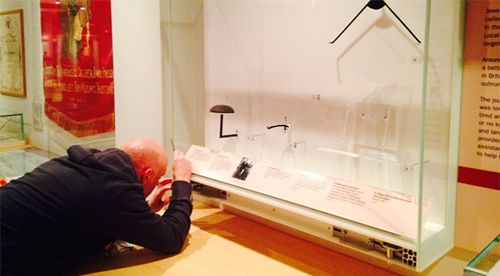 A lot of measurements had to be taken, including measuring all new objects to go on display and all those being removed. Rob Gammage (Exhibition Site Management), seen measuring a case above, visited both museums and meticulously measured every single object.

To allow the exhibition-build contractors, Set Works, to create the new object mounts and case displays, all objects were removed from the cases involved.

In the meantime we sent several delicate textile items to Janie Lightfoot for conservation and mounting. One such object was this high-vis vest which was worn by Warrant Officer WO Guy Bishop (nee Gunter Gustav) during World War II.

Serving in the Intelligence Corps, Guy wore this vest to save him from being killed by fellow British soldiers following an advance mission into enemy territory. Janie and her team created a fabric mount for the vest so that it can be protected whilst on display, as well as ensuring it kept its shape.

Another exciting object to go on display, for the first time since the Jewish Military Museum acquired it in 1987, is Tommy Gould’s Victoria Cross.

Tommy Gould was awarded this Victoria Cross for outstanding bravery while serving on the submarine HMS Thrasher during World War II. Gould and his comrade removed an unexploded bomb wedged in the submarine’s outer casing saving the lives of all those on board. 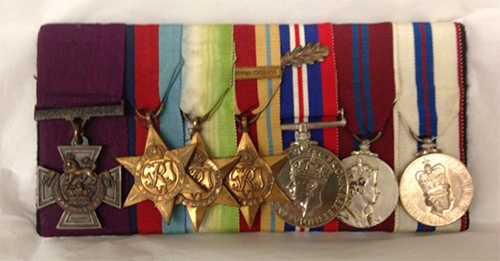 The installation of the new display took three days and we prepared all objects for mounting in the Dangoor Meeting Room, separating them into boxes relating to their new case. 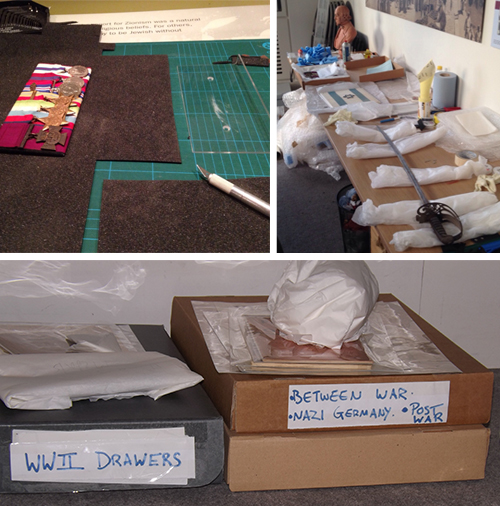 On Thursday 18 December, Rob, Ash and Tom from Set Works arrived at the Jewish Museum and got to work installing the new case displays.

New back boards were installed into the cases and drawers, and the curators placed objects into their new mounts.

The installation took three long days of hard work but, apart from a few tweaks, we completed on time! We’d like to thank all Jewish Museum and JMM staff who helped make this installation possible, with special thanks to Maaike, Marine and Gaby at Gabrielle Underwood (Exhibition Design), Rob Gammage (Exhibition Site Management) and Set Works. We hope you can visit and see our new displays, but in the meantime here are a couple of photographs of some of the completed cases. 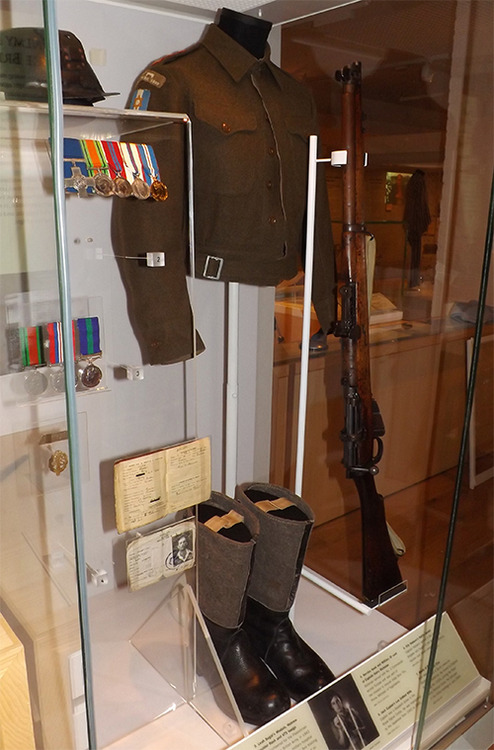