About the Jewish Military Museum

Key objects on display include:

• Tommy Gould’s Victoria Cross Tommy Gould was awarded this Victoria Cross for outstanding bravery while serving on the submarine HMS Thrasher during World War II. Gould and his comrade removed an unexploded bomb wedged in the submarine’s outer casing saving the lives of all those on board.
• Original handwritten posters by Reverend Michael Adler, the first Jewish chaplain on the front line. Adler was senior Jewish chaplain on the outbreak of the First World War. Noting the lack of religious support given to the 50,000 Jews serving he lobbied the Ministry of Defence to allow Jewish chaplains onto the front line. He sent notices and letters in advance of his visits so that Jewish soldiers could come together for services and Jewish High Holy Days.
• The diary of Florence Greenberg (née Oppenheimer)
In this diary Oppenheimer describes her life as a nurse on a hospital ships in the Mediterranean including the devastation wrought by the Gallipoli campaign and the boredom aboard ship in between battles. Post-war she became the cookery writer, Florence Greenberg.
• Corporal Henry Jessell’s Crimean War medals
Jessell’s medals, from the 1850s, are the earliest in the collection. Pre-emancipation, Jews could not gain a commission and it can be difficult to uncover stories of Jewish service. More is known about Jessell as he lived until he was in his late nineties and laid a wreath at the cenotaph in 1928.
Over 1,200 objects from the Jewish Military Museum collection have been digitized as part of the We Were There Tooproject. We Were There Too is a unique cross community project created to capture, record and preserve the impact, experience and contribution of London’s Jewish communities during the First World War era.

‘For King and Country is an online resource of personal accounts of Jewish service in the First World War. Read accounts from Isaac Rosenberg, Marcus Segal, Florence Oppenheimer and Percy Levy.

The First World War: Remember Me is an education workshop for schools, which helps students to understand that by investigating people’s lives it can help us to understand what happened in the past.
The programme can be tailored to History, English, Religious Studies or Local History classes.
Find out more about the workshops for primary schools and for secondary schools 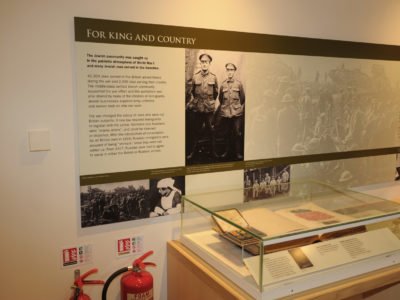 Over 5,000 objects from the Jewish Military Museum including the personal diaries, letters, medals, uniforms and souvenirs of Jewish soldiers fighting for Britain been integrated into the Jewish Museum London's work and displays.