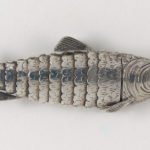 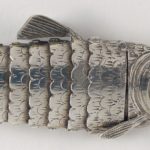 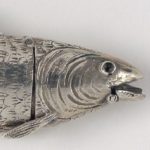 We can see a small silver fish with fins and scales. The scales that make the body of the fish seem movable.

This is a miniature silver spice tower in the shape of a fish with fins, scales and a movable mouth. The head comes off to reveal the spices contained inside, such as cinnamon, nutmeg and cloves. The maker and owner of this object are unknown.

The spice box is used on Saturdays at sunset when Havdalah, the closing ceremony of Shabbat, takes place. The spice box is passed around and everyone smells the aromatic spices as a way to uplift the spirit since the end of Shabbat is experienced as a sad moment. The smell of the spices is also supposed to awaken the senses and mentally prepare Jewish people for the upcoming working week. Additionally, since it is a miniature, it might have been used by the owner during travels as a way to maintain the ritual of Shabbat while away from home.

We might wonder who was the maker of this spice box? We might also wonder who the spice box belonged to and why they shaped it like a fish?

Spice boxes are used at the end of Shabbat for the concluding ceremony of Havdalah. Havdalah means ‘distinction’ since it separates the ritual of Shabbat from the rest of the working week. Shabbat is one of the Ten Commandments: it is a weekly ritual that starts every Friday at sunset and finishes at sundown on Saturday. During Shabbat, some Jewish people do not work and keep it holy to honour the story of Creation which tells that G-d created the world in six days and rested on the seventh day. Shabbat is a day to spend with family and friends, to go to the synagogue for religious services and to relax. At the end of Shabbat, a cup of kiddush wine is drunk, sweet spices that are contained in a spice box are smelt and a plaited candle is lit. The smell of sweet spices acts as a reminder of the sweet and pleasurable memory of Shabbat that has now concluded and it awakens the mind and the body for the upcoming working week.

Interestingly, this particular spice box is in the shape of a fish with fins and scales, prompting a link with food laws. Food laws, known as kashrut laws, are contained within the mitzvot, predominantly in the Books of Deuteronomy 14 and Leviticus 11. Kashrut laws determine what Jewish people can and cannot eat and adherence to these laws shows obedience and self-control. Nevertheless, the extent to which kashrut laws are followed depends on the stream of Judaism the individual belongs to and on personal choices.

Kashrut laws state that Jewish people can only eat land animals that have split hooves and chew the cud (e.g. cows) and allowed seafood must have fins and scales (e.g. tuna). Therefore, this spice box is in the shape of a fish that can be eaten by Jewish people since it has fins and scales. Food that is not allowed is called trefah (i.e. unclean food), whilst neutral food is called parev (e.g. vegetables, eggs or pasta). Moreover, kashrut laws state that meat and dairy cannot be mixed or eaten together. Parev food can be mixed with either meat or dairy, as long as it is washed and checked for insects before it is eaten. Orthodox Jews observe all the food laws and some of them might have different sets of kitchen utensils and appliances to cook meat and dairy in order to avoid any contact between the two.