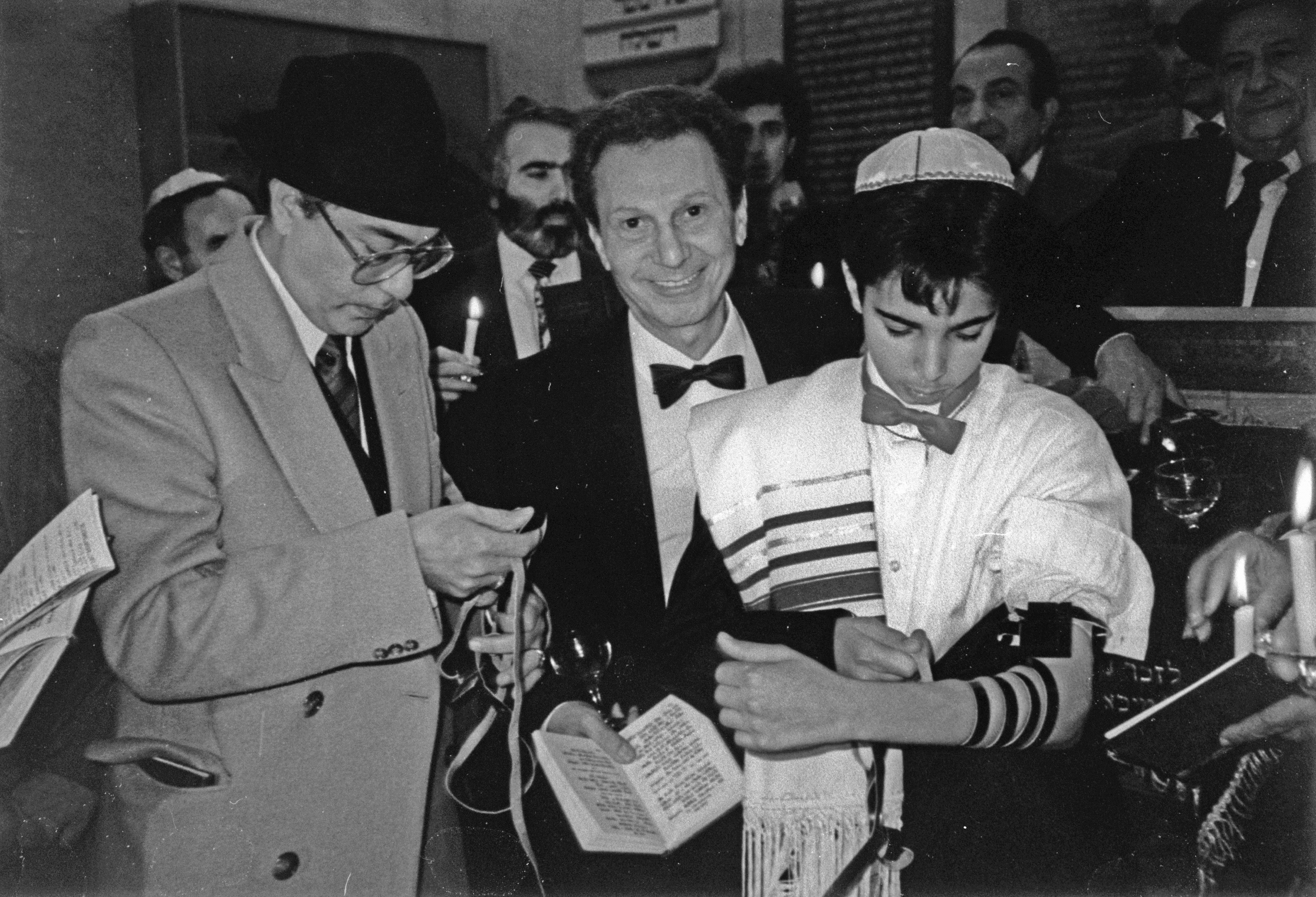 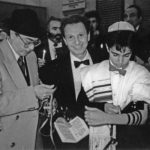 We can see a boy tying a tefillin onto his left arm. We can also see a group of men behind and beside him.

This photograph shows a boy at his Bar Mitzvah laying tefilling with the assistance of his father (centre) and a family friend. Bar Mitzvah’s were not important life cycle events for the Adeni Jewish community, but after many of them moved to London some of their habits and tradition changed. This picture was taken in London of an Adeni family. Wearing tefillin is one of the 613 mitzvot, or commandments. A boy does not wear tefillin until he approaches the age of thirteen.

Tefillin are a pair of black leather boxes containing Hebrew parchment scrolls. A set includes two—one for the head and one for the arm. According to the Torah, Jewish males should bind tefillin to their heads and arms every weekday during morning prayers, except on Sabbath and major Jewish holidays. Each box consists of three main components: the scrolls, the box and the strap. The scrolls contain text from Torah. The Traditionally, Jewish males over the age of bar mitzvah (13 years old) should perform the mitzvah of tefillin.

Description: Photograph of a boy laying the tefillin. at his Barmitzvah with the assistance of his father (centre) and a family friend.

Aden is a seaport situated on the southern coast of the Arabian Peninsula at the entrance to the Red Sea. It was previously a British colony. Because of its location, it was historically the main commercial distribution centre for the region. Jewish people were one of the first settlers of Aden and they played an important role in the international Jewish relations in medieval times. Their everyday lives were heavily influenced by religious traditions. Men, women and children had a well-defined role in the community which they stuck to even in the 1950-60s. Religion shaped the life of the community, it shaped the day, the year and the life cycle. The life cycle events were extremely important for the community, such as weddings, funerals, however the Bar Mitzvah played a relatively small role, only a small party might be held.

A Bar Mitzavah means ‘Son of the Commandments.’ Bar Mitzvah is the traditional celebration of the time when a boy reaches the age of 13 and becomes responsible for fulfilling the commandments of the Torah. During the ceremony a boy is expected to read aloud from the Torah for the first time. This coming of age ceremony is when a boy will become an adult and take responsibility for his own actions. It is a very important milestone not only in the life of the boy but of the whole family’s so it is sometimes celebrated with a big party. The traditions of Bar Mitzvahs may vary depending from the community. In some communities girls may also have a coming of age ceremony known as a Bat Mitzvah, meaning ‘Daughter of the Commandments.’

The situation of the Jewish community of Aden changed negatively after the Second World War. In 1967, the city gained independence from Britain and became the capital of South Yemen. Both of these events caused many Adeni Jewish families to flee and leave their homes. Many Adeni families came to Britain, today there is a small Adeni Jewish community living in London and the UK.