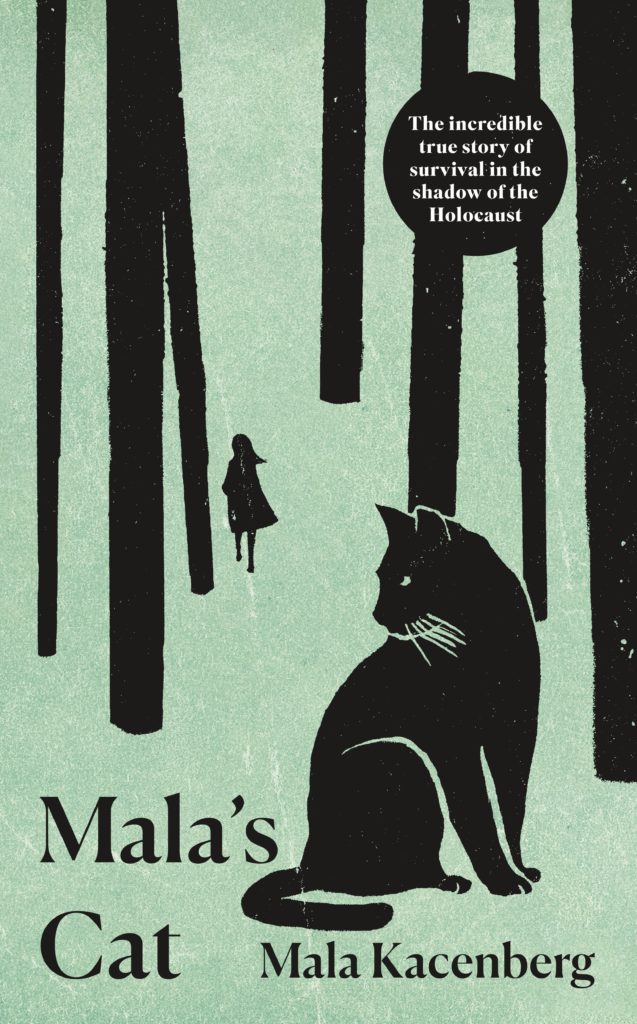 Coming soon to a bookshop near you…

Mala’s Cat is a unique book about the true story of a 12-year-old Polish girl who loses her entire family in the Holocaust. Living alone in the forests, her cat becomes her protector, guide, family, and witness to unspeakable horrors. Against all odds, they survive.

This memoir, written in Mala’s own child-like voice, allows readers to see the war through the innocence of a child’s eyes. Sustained by the stories she learned in her grandfather’s classroom and comforted by her cat who she believes is a guardian angel, this book has a unique spiritual richness.

Mala Kacenberg was born in Tarngrod, Poland in 1927. As WW2 broke out, Mala found herself having to fend for herself at the tender age of 12, eventually escaping the ghetto and surviving in the forest, witnessing the horrors unfold in front of her. Surviving by her wits, courage, and the help of a guardian angel (her cat Malach), she was the sole survivor of her family. Mala immigrated to London with other Jewish refugees after the war, where she raised a large family and ran a bed & breakfast. 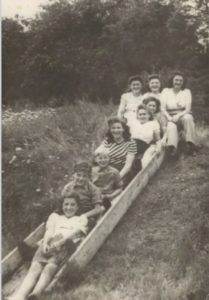 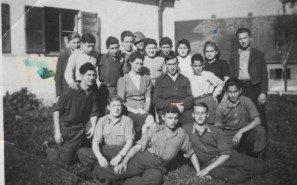 (Mala and children in holiday camps upon arrival to the UK)

Read below a sneak preview of Mala’s Cat:

The terrain was becoming increasingly more difficult to negotiate, and my feet got caught in the mud, which stuck to my shoes. I became concerned about the effect the weather was having on my appearance and how conspicuous I would then be when I entered the villages in search of food. I was happy that I could not see what I looked like, and the animals certainly did not care.

Until then, my shoes had remained serviceable, but they could not last much longer. I knew that it would be impossible to continue walking without them, so I devised a plan to preserve the soles a little longer by tying bits of rags around them. This method slowed down my walking, but I was in no hurry; I had plenty of time. Despite my efforts to protect them, my shoes soon fell apart, and I had to throw them away. I knew that, unlike the animals, I would not last very long in stockinged feet, and I became fearful of stepping on something sharp or even a little snake. But I remained safe, never tripping over logs. I did not even catch a cold. I kept on thanking Hashem for that.

I found myself a good place to hide during the day; this was in the middle of a thicket just big enough for me and Malach. I spiked some branches and placed them in front of the ‘entrance’. Anyone wishing to enter my hideaway would first trip and hurt himself, and in the ensuing confusion, I would have time to slip away to the other side of the bush. I wondered if my plan was just wishful thinking, but did not Hashem say: ‘You try, and I will help you’?

I did not have to wonder very long, because a short while later, when I was hiding in that thicket, I saw a dark shadow moving in my direction. I prayed that it was not a partisan or fugitive as I didn’t want them to get hurt by my defences. ‘Oh, please,’ I said to Malach, ‘I don’t want to hurt innocent people. I lay still without making a sound.

I soon heard a man cursing in German as he approached the spot where I crouched. He may have heard the sound of moving branches coming from my direction, because he seemed to sense that there was someone nearby. Perhaps he had unusually sensitive ears and could hear from very far. But even so, he could not have discerned whether the noise came from an animal or from a human being. Of that I was sure, and I tried to relax, having no alternative.

Nearer and nearer he came, and soon he stopped to look in my direction. Surprisingly, I felt no fear, just hate and an urge to hurt him. Though I knew that neither my knife nor any branch would be a match for his gun, I decided to have a go at him with a branch straight in his eyes should he discover me.

It did not take too long, and soon the tall, fat German approached, and I could see that my plan had worked very well for he stumbled and hurt himself on the branches as he fell. It took him a few moments to recover, but he soon straightened himself, and cursing even more vigorously, he headed straight for my hiding place. When he was just a few feet away from me, Malach jumped down from the tree and went straight for him, scratching his face with her claws.

‘Du dumme Katze. You stupid cat!’ he shouted and tried to shoot her.

Malach managed to get away and hide up a tree, as only cats can do. The German looked up at the tree, but he did not take aim. Satisfied that what he had believed to be a human being was only a mischievous cat, he limped away and disappeared into the thick forest. Malach now returned and sat next to me, her bright eyes shining in the darkness.

Reassured by her presence, I allowed myself the luxury of dozing off for a few hours again.

More and more, I became determined to put up a struggle and die a hero’s death if need be. I remembered sitting in the back of my grandfather’s class and hearing the story of Chanukah and the Maccabean revolt and decided that if the Maccabees could fight, then so could I. So what if I was only a young girl with no one to teach me how to do it? ‘I am ready to persevere with my struggle,’ I said to myself. 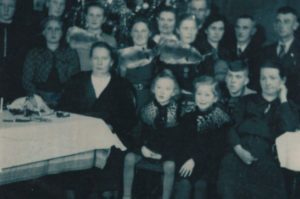 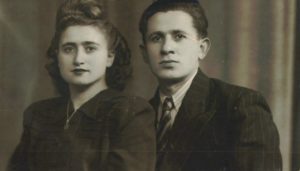 Mala and her husband

Posted in Blog by Eliana Mendelsohn on January 24th, 2022.