Memento Mori and the Dutch and Jewish Involvement in Transatlantic Slavery 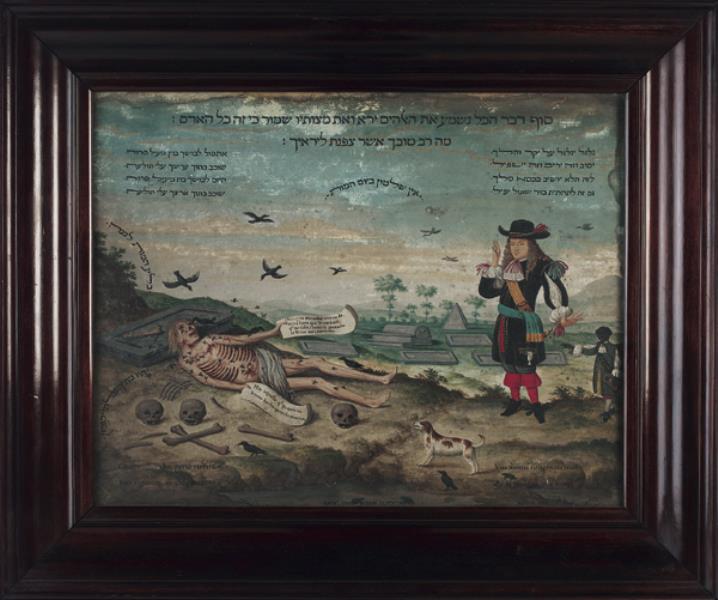 For Black History Month 2019, the Jewish Museum London hosted an exhibition on the Jewish Abayudaya community in Uganda and organised tours exploring ways in which race is portrayed through religion. One of the objects in the museum’s collection discussed in the Black History Tour is a painting with the title “A Memento Mori”.

“A Memento Mori” was painted by the Dutch painter Benjamin Godines Senior in 1681. It shows a young white man in the centre and his servant, a smaller black man, in the right corner, both fashionably dressed.

They are looking at bones and a rotting corpse attacked by flies and birds in a cemetery. The wealthy man hides the view from his face and his servant points towards the scene. There are moralistic quotations in Hebrew at the top and texts in Spanish at the bottom of the picture.

This painting is one of three Memento Mori pieces that are very unusual due to their Jewish influences. It was commissioned by Isaac de Matatiah Aboab from Amsterdam.

The history of Memento Mori paintings

“Memento mori” is a Latin phrase that translates to “remember you must die”.

Memento Mori paintings use metaphors to show life’s shortness and fragility. They often depict symbols of mortality such as skulls, clocks, extinguished candles or rotting fruit and flowers.

Particularly in the Netherlands, in the 16th and 17th century, Memento Mori still life paintings became very popular and were often also called “vanitas”. Memento Mori paintings are famous within Christian iconography but the tradition goes back to Roman times.

At an empirical Roman triumph, the military generals were paraded through the streets on a chariot and presented to the public as ‘divine’.

On their chariot, they would have an enslaved person stand behind them repeating the phrase Memento Mori. This was to remind the generals that despite their god-like adoration on that day, they could die or be brought down the very next day.

As the Roman Empire changed and later adopted Christianity as the state religion, the idea of Memento Mori also evolved and became a method to instil an idea to ‘seize the day’.

It was adopted by branches of Christianity as a reasoning to avoid sin, as pleasures are momentary and punishment is everlasting. The Christian adoption of the Memento Mori message is important as it shows why these three Jewish pieces are so rare.

Transatlantic slavery and the Dutch and Jewish involvement

This makes it the biggest forced migration in history. The majority of enslaved people were sold by Africans from central and western parts of Africa to European slave traders, who shipped them to the New World. The main European trading countries were Portugal, the United Kingdom, France, Spain and the Netherlands.

The Dutch first participated in transatlantic slavery in the 1630s by transporting slaves to Brazil. Following that, the Netherlands also got involved in the slave trade to the Spanish colonies. In the 18th century, the country’s most important slavery markets were what are today Suriname and Guyana.

Initially, the Dutch trade was organised by the so called Dutch West Indies Company, but after 1730, an era of free trade developed. The Dutch part in transatlantic slavery is estimated at 5-7 percent. This means that about 550,000 – 600,000 Africans were deported by the Netherlands.

Dutch Orthodox Rabbi Lody van de Kamp wrote a book about Dutch Jewish complicity in the transatlantic slave trade. He talks about the Jodensavanne (“Jewish Savannah”), an agricultural community with 40 Jewish-owned plantations with at least 5,000 enslaved people in a part of former Dutch Guyana.

Seymour Drescher, a historian at the University of Pittsburgh states that Dutch Jews may have accounted for the resale of at least 15,000 enslaved people on the Caribbean island of Curacao.

According to Drescher, there was a time when Jewish people controlled about 17 percent of the Caribbean trade in Dutch colonies. However, Jewish involvement in transatlantic slavery is not unique as wealthy merchants across Europe of different faiths all participated.

The first people to fight for abolition were the captives and enslaved themselves. Many people who were enslaved resisted, whether against their capture in Africa or their sale and exploitation on plantations in the Americas.

The effect was not immediate everywhere, as plantation workers in Suriname had to continue their former work for another ten years. For the 150th anniversary of Dutch abolition in 2013, some institutions organised activities and exhibitions to remember this dark period of history.

Since the abolition of transatlantic slavery, many people are still continuing the struggle against oppression, exploitation and inequality.

In their exhibition, the International Slavery Museum in Liverpool write: “Only when we understand transatlantic slavery and its profound influences can we hope to understand the modern world (…). Only when we are prepared to fight for freedom and equality will we have any hope of attaining it.”