Home » Boxing as a Jewish Sport

Boxing as a Jewish Sport 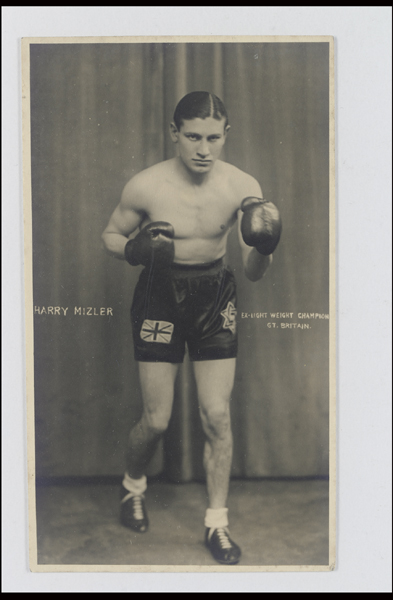 In the Jewish Museum, we have got many objects all about the sport of boxing from different times in history.

Boxing is a sport that goes back a long time. Humans have always been fist fighting but the earliest evidence of contest date back to the 3rd and 2nd millennia BC.

In the History Gallery, we have got many objects about Daniel Mendoza, who used to be the boxing champion of England but also other boxers like Harry Mizler, who competed for Great Britain in the Summer Olympics.

The history of Jewish boxing includes a lot of stereotypes.

On one side Jewish people have always been associated with a more intellectual lifestyle, in which education played more of a role than being athletic especially in such a brutal sport.

On the other hand, some people argued that Jewish people are genetically advantaged in the sport.

In the 1920s and 30s becoming professionals was not necessarily an option for most of the Jewish youth and because of that in the period between 1910 and 1940, there were 26 Jewish boxing world champions.

In the 1920 and 1930s 6% of the champions were Jewish and it is said that in total one-third of all fighters were Jewish. 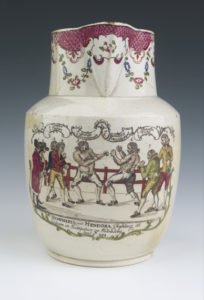 After WW2, when choosing a career, as well as other economic opportunities, became possible, Jewish boxing rapidly disintegrated.

One of the first extremely famous but also important Jewish boxers was Daniel Mendoza. Mendoza was born on the 5th of July 1764 in England to his Portuguese-Jewish parents Moses and Judith Mendoza.

He was an English prize-fighter and was the boxing champion of England from 1792 to 1795. Daniel Mendoza is a legend in the history of boxing as he lived in an era where boxing was still bare-knuckled.

These fights continued until the opponent was knocked out or ended by foul or draw.

Mendoza’s first fight took place when he was 16 years old working for a tea dealer in Aldgate, London at the time. It was not a prize fight but more like a contest to settle an argument with a porter over the payment for a consignment of tea.

The fight lasted for 45 minutes ending when the porter declared he was unable to continue.

In the following eight years Mendoza was undefeated in 27 straight fights, but what defined his career was his “scientific style” of boxing which he used to win three fights with former mentor Richard Humphries between 1788 and 1790.

Before Daniel Mendoza boxers generally stood still and merely swapped punches to win the fight. It wasn’t about technique until Mendoza introduced defence.

He incorporated strategies like, moving around, ducking away from punches as well as blocking them and managed to win fights against many opponents who were a lot heavier than him.

Daniel Mendoza made his last public appearance as a boxer in 1820 one day before his 56th birthday after he hadn’t fought in 14 years. He was defeated after 12 rounds.

Mendoza’s new style of boxing was exemplary for many boxers after him, one of them being Harry Mizler.

In the History Gallery of the Jewish Museum, you can find a pair of boxing shorts with a Star of David on them. These shorts belonged to Harry Mizler. 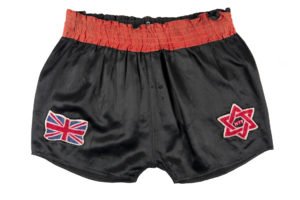 Mizler was a Jewish boxer from St George’s in London. He was born on the 22nd of January 1913, so one year before WW1 and died in March 1990 at the age of 76 in Wandsworth, Greater London.

Mizler was of polish-Jewish descent but was the only one of his siblings who was born in England.

While learning everything he knew about boxing from his brothers Judah and Moe he also helped out his mother with their fish stall in Watney street market every single morning.

When he was 10 years old Mizler joined his first boxing club at Bernes Street School but there was very little opportunity for him at this club.

When the school and the boxing club closed down he continued to learn from his brother Moe and eventually started fighting and winning the London Federation of Boys Club Championship and the Stephney Boys Club title at the age of 14.

At 17 he won the federation of working Men’s clubs bantamweight title and competed and took gold in the 1930 Empire Games in Hamilton, Canada.

His biggest accomplishment was when he was invited to fight at the Los Angeles Olympic Games in 1932, even though he was eliminated in the first round of the lightweight class.

In total Harry Mizler fought 81 fights, winning 63 of them. 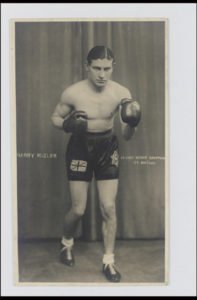 After his boxing career ended he was called to serve the British Royal Air Force in 1940 for the duration of WW2, becoming a physical training instructor by using his boxing experiences to teach thousands of airmen the basics of defence.

After the war, he became an entrepreneur in a garment centre.

We have many objects telling similar stories all about famous Jewish boxers, who lived such different lives, had such different ethnic backgrounds, different family histories but all shared their interest in the sport of boxing.