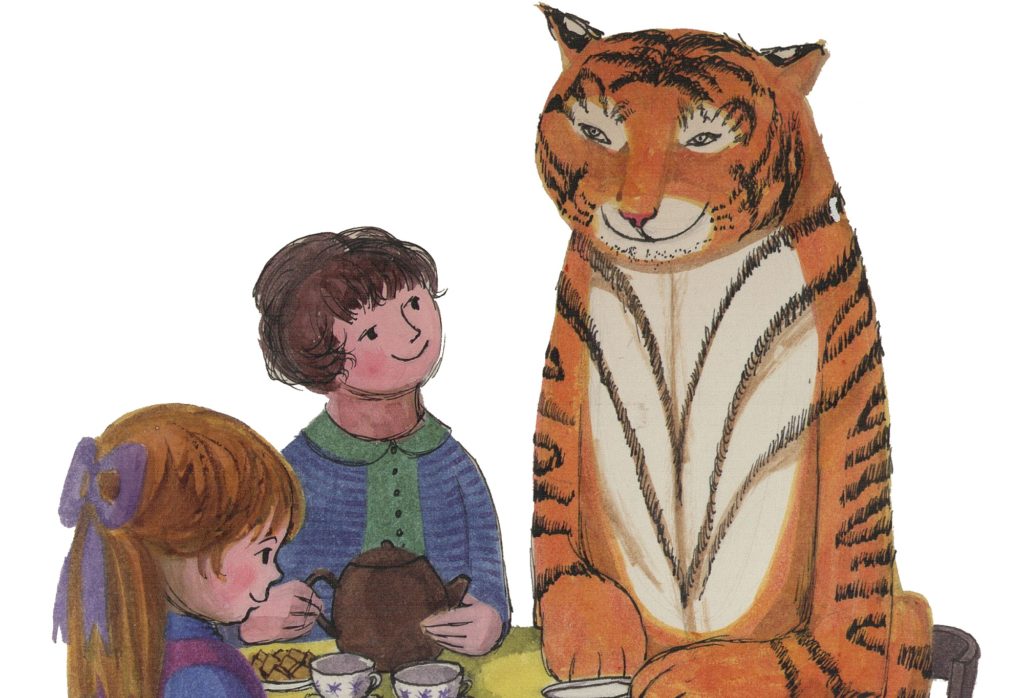 Have tea with a life-size Tiger, curl up in Mog’s basket with one of Judith Kerr’s classic picture books, and discover the childhood drawings of a girl escaping Hitler’s Germany. Tiger, Mog and Pink Rabbit: A Judith Kerr Retrospective at the Jewish Museum invites families to enjoy a showcase of almost 80 years of original artwork and illustrations by one of Britain’s best loved authors.

The exhibition celebrates the picture books still so loved by children around the world today, The Tiger who Came to Tea, and the Mog series. It also explores the background to When Hitler Stole Pink Rabbit, featuring drawings Judith made as a child refugee fleeing Nazi Germany.

Beginning as a bedtime story for her children, Judith Kerr’s first picture book, The Tiger Who Came to Tea, was published in 1968 and soon became a classic. By its 40th anniversary in 2008, it had been translated into 11 languages and sold over five million copies. Visitors can go to the heart of the action by having tea with the tiger in the museum, as well as enjoying Judith’s original drawings for the book.

Visitors are also invited to follow over 30 years of the lovable Mog series, beginning with Mog the Forgetful Cat in 1970 and drawing to a close with Goodbye Mog in 2002. Judith took inspiration from her own family and her real-life cat, and young readers can curl up with the books in a cosy basket reading area.

Judith Kerr escaped Nazi Germany with her parents and brother in 1933 at only nine years old, and her mother preserved the childhood drawings she created as a refugee in Switzerland and France. These drawings give a unique insight into how Judith became the artist and storyteller she is today. Her story is also told through the eyes of her literary alter ego, Anna, in three semi-autobiographical novels for older children in her Out of the Hitler Time trilogy. The exhibition includes illustrations inspired by these themes and Judith’s experiences as a refugee.

Judith Kerr herself will be attending the Jewish Museum to give two talks about her life and story on Sunday 26 July and Thursday 10 September. Children and adults are also invited to participate in a series of Illustration workshops and events throughout the summer to coincide with the exhibition.

“We are honoured to be holding this retrospective of Judith Kerr’s artwork and the Jewish Museum is a fitting place to explore Judith’s experience as a refugee from Nazi Germany settling in London. This exhibition will be a treat for all the family and we are looking forward to welcoming visitors so that they can discover more about Judith’s remarkable life, enjoy her beautiful artwork, and have tea with the tiger!”

Tiger, Mog and Pink Rabbit: A Judith Kerr Retrospective is a Seven Stories exhibition. The exhibition was first on display at Seven Stories, National Centre for Children’s Books, Newcastle upon Tyne in 2010.

The Jewish Museum London is for people of all backgrounds and faiths to explore Jewish heritage and identity as part of the wider story of Britain.

The only museum in London dedicated to a minority community; the museum also houses a café, shop, 100-seat auditorium, and education space.

About The Judith Kerr Collection

Judith Kerr deposited her extensive archive with Seven Stories in 2008. The archive includes finished artwork for 24 of her published titles for children including The Tiger Who Came to Tea, all of the books in the Mog series, and the line drawings for the first of her three novels, When Hitler Stole Pink Rabbit. The collection also contains compositions, illustrated letters and drawings created by Judith during her childhood in Berlin, Paris and London; life drawings and textile designs from her time at Art College; unpublished artwork for two picture books; and a small quantity of sketches and preparatory material relating to her published titles.

Seven Stories is the only place in Britain dedicated to the art of children’s books and the joy of reading, and one of just a few such places in the world. Their work is enjoyed by over 150,000 people every year.
Everything we do aims to inspire children and grownups to be curious, imaginative and creative. We strive to ensure that people of all ages, backgrounds and abilities can take part to enjoy a lifetime of reading for pleasure.

Our home is a carefully converted Victorian warehouse in Newcastle upon Tyne in Northeast England. We opened in 2005. Our seven floors house galleries for exhibitions, performances and creative space, a specialist children’s bookshop and a café.

Seven Stories is widely recognised for its abilities and achievements. We have established an internationally important collection of artwork, manuscripts and archives of Britain’s most acclaimed writers and illustrators for children from 1930s to the present day. We bring this unique treasure trove to life through playful and immersive exhibitions, entertaining and informative public events, imaginative and inclusive learning and outreach programmes and research opportunities.
Seven Stories was awarded National status by Arts Council England in 2012 in recognition of the significance of our collection and its high standard of care, and the excellent ways that we engage with our visitors and users.