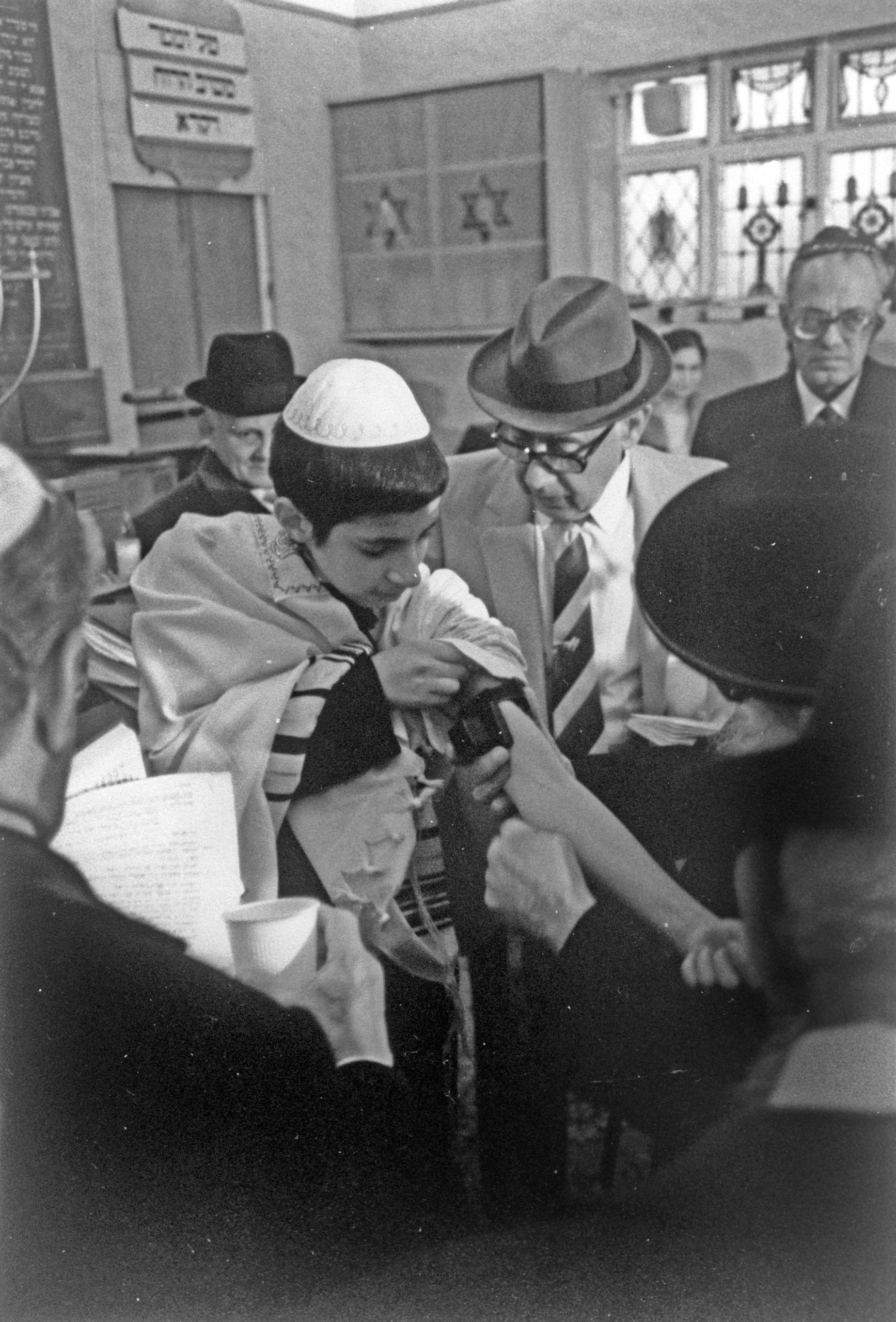 This is a photograph showing a Barmitzvah celebration in the Adeni synagogue in Stamford Hill, London, 20th Century.  Here, the boy is helped to lay tefillin for the first time.

Tefillin are boxes which contain scrolls. They are usually made out of black leather. Tefillin always come in pairs, as one is worn on the head and one on the arm wrapping down to the hand. The leather straps are used to help tie them on and are wrapped in a special traditional way. Tefillin are worn only during prayer, and are traditionally worn by adult Jewish males, but are worn by women in some streams of Judaism. Often tefillin are given as a gift to children when they complete their bar or bat mitzvah at the age of 12 or 13.

Bar Mitzvah’s were not important life cycle events for the Adeni Jewish community, but after many of them moved to London some of their habits and tradition changed. A Bar Mitzvah is a coming of age ceremony, it translates as ‘son of the Commandments’, it marks the age at which children are responsible for keeping the commandments in the Torah, rather than it being their parents’ responsibility. This picture was taken in London of an Adeni family. Wearing tefillin is one of the 613 mitzvot, or commandments.

Aden is a seaport situated on the southern coast of  Arabian Peninsula at the entrance to the Red Sea. It was previously a British colony. Because of its location, it was historically the main commercial distribution centre for the region. Jewish people were one of the first settlers of Aden and they played an important role in the international Jewish relations in medieval times. Their everyday lives were heavily influenced by religious traditions. Men, women and children had a well-defined role in the community which they stuck to even in the 1950-60s. Religion shaped the life of the community, it shaped the day, the year and the life cycle. The life cycle events were extremely important for the community, such as weddings, funerals, however the Bar Mitzvah played a relatively small role, only a small party might be held.

The situation of the Jewish community of Aden changed negatively after the Second World War. In 1967, the city gained independence from Britain and became the capital of South Yemen. Both of these events caused many Adeni Jewish families to flee and leave their homes. Many Adeni families came to Britain, today there is a small Adeni Jewish community living in London and the UK.