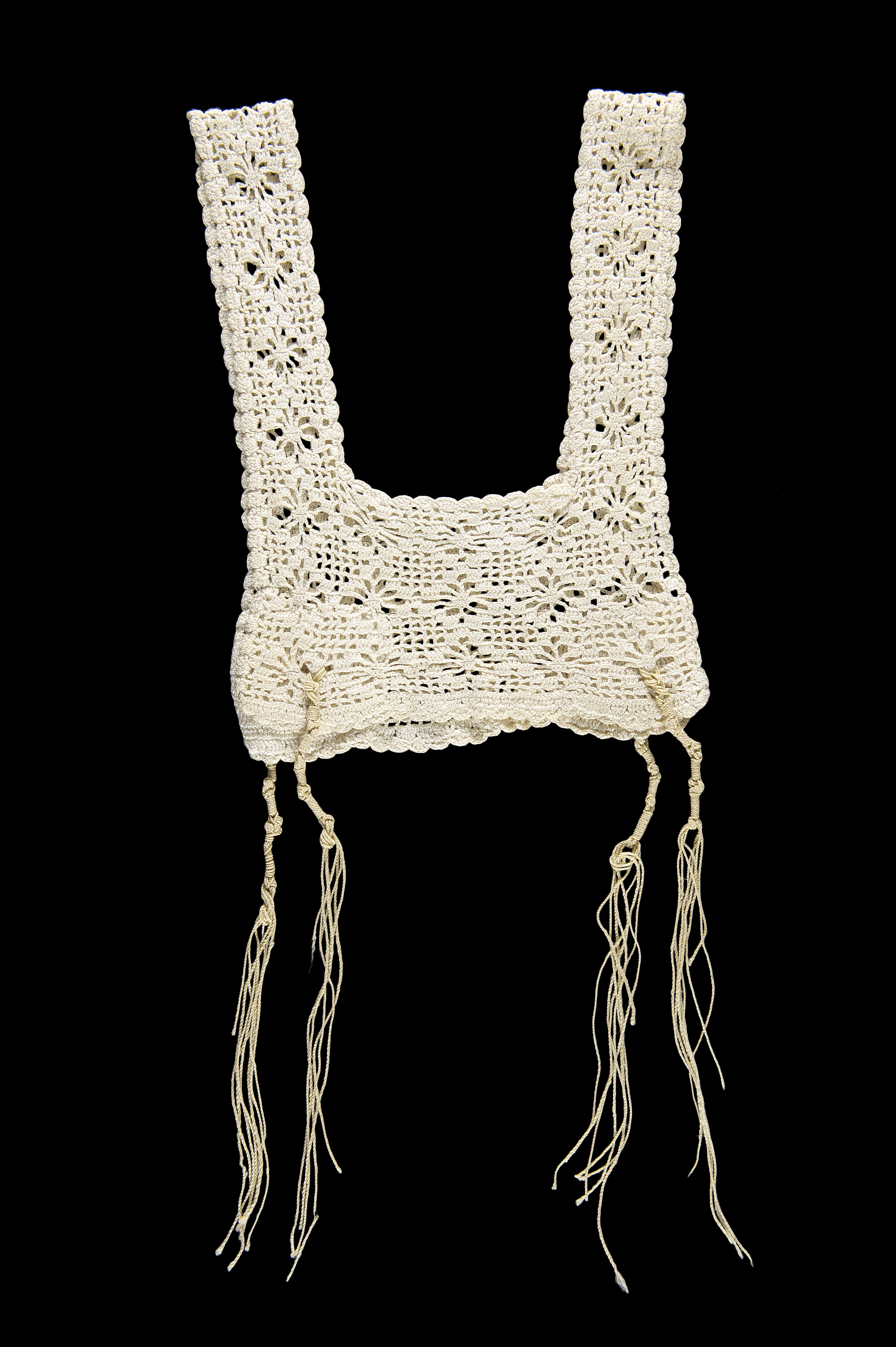 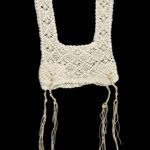 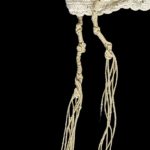 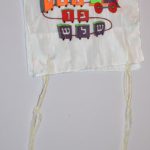 We can see that there is a crocheted floral pattern on a piece of small rectangular cloth, with a piece of knotted string on each of the four corners. There is also a hole in the middle of the cloth.

A tallit is a prayer shawl worn by some Jewish people during prayer and in religious ceremonies such as a bar mitzvah or marriage ceremonies. The term is loosely used to describe one of two garments, a tallit katan (small), of which can be worn either over or underneath clothes at any time, or a tallit gadol (large), a large piece of rectangular cloth which is usually worn only as an over-garment during prayer. Because it can be worn underneath the clothes and at any time, many Jews believe that wearing a tallit katan helps to remind them of God at all times. It is traditionally made of wool or linen, however most Orthodox Jews prefer to wear ones that are white and made of wool. Although it is not specifically mentioned in the Torah that a tallit must be worn, many Jews encourage men to wear one based on a verse in Numbers 15:38-39, in which Moses urges the Children of Israel to “make them throughout their generations fringes in the corners of their garments.” Because of this, many Jewish people also see it as an obligation to wear a tallit.

A tallit has tzitzit, a piece of knotted string made with 4 strands of thread, one on each corner, which reminds Jewish people of the teachings and commandments of the Torah and the words of God. It is also believed that the word tzitzit using gamatria (where the letters in the Hebrew alphabet are turned into numbers) and the knots of the tzitzit has a value of 613, of which is the number of commandments in the Torah, also adding to its symbolic nature that reminds Jewish people of the words of God.

The tallit katan is an important symbol of Judaism for some Jews. Many regard it as a custom to wear because it was strongly encouraged to be worn in the Torah, despite not being explicitly mentioned as a commandment. Furthermore, according to many Orthodox Jews, women are not obligated to wear a tallit katan. However, members of Reform communities would believe that women and men can choose to wear one as a sign of religious commitment.

We might wonder why this tallit katan was crocheted rather than being made of another material?

We may also wonder who created this tallit katan, and who it was made for?

On Display at the Jewish Museum: Yes

The style of tallitot (plural of tallit) from the early 20th century to present times has changed very much, as displayed by this one. It was hand made by Edelman’s grandmother, which was likely a more common practice than today, when few people know how to do these kinds of handicrafts. Today,a s can be seen in the photograph of the modern tallit katan for children, they can be easily bought from a shop and may have elaborate designs especially for children.