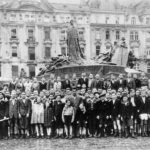 We can see a black and white photograph of a large group of children standing in front of a statue in an old town square.

This photograph captures an important moment in these children’s lives.

There are around 300 children in the photo all of whom are Jewish and survivors of the Holocaust. Look closely at what they are wearing. All these children were about to make the long journey from Prague to Britain where a committee had been set up to receive and take care of them.  Look closely and see if you can spot any adults. The reason why these children traveled together to Britain is because many of them had lost their families during the war.

This photograph shows part of the group who became known as “The Boys” – survivors of the Holocaust who were brought to Britain in 1945 and 46 by the ‘Central British Fund’ and the ‘Committee for the Care of Children from Concentration Camps’.

Object Name: “The Boys” in Prague

In June 1945 the British Home Office approved a plan to transport one thousand orphans to Britain for recuperation before their resettlement elsewhere. The first group of 300 was brought from Theresienstadt camp to Prague, and then flown to England on Lancaster bombers on 14 August 1945. Since very few young children survived the camps, all but 30 of the orphans were over the age of 12. After landing in England this first group of children were housed at a hostel in Windermere, where they received Medical Treatment and religious direction. The second group of orphans arrived in Southampton in November 1945, followed by groups in February and March 1946. The final group of orphans left Prague in 1946, stayed in France for 6 weeks before coming to England in June.

Afterwards the children were divided up according to their religious and political backgrounds (Ultra-orthodox, orthodox, religious Zionists or secular Zionists) and to different hostels all over the country.

Overall 732 came to Britain under the scheme. All but 12 of these 732 children were orphaned by the war. Around half of these stayed in England and the others moved to Israel, the US and Canada. Despite trying to find them, a full 1000 orphans who could have come to Britain were never found.