Photograph of a silver Hamsa banner 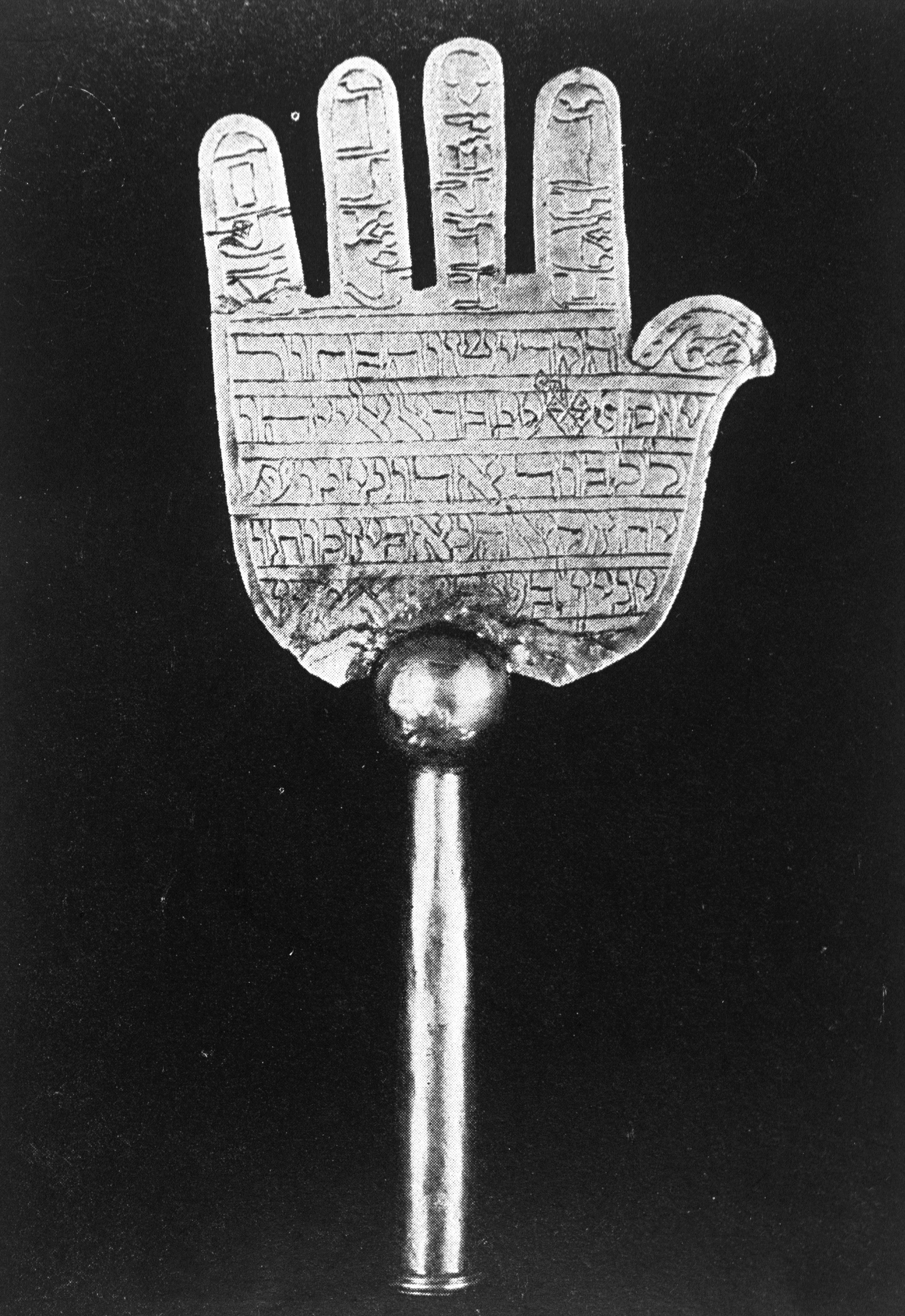 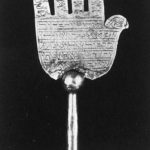 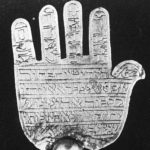 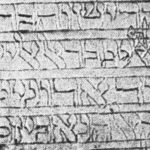 We can see a silver object in the shape of a hand. We can also see Hebrew writing inscribed within the hand.

Look closely, What do you see?

We know that this object is a photograph of a silver Hamsa banner. Banners such as this one were carried during pilgrimages to grave sites. The inscription says that it was presented by ‘Joseph Abdullah Eliahu in honour of our master the Prophet Ezekiel in the year 5587 = 1827’. Prophet Ezekiel is an important Hebrew prophet whose prophecies are recorded in the Hebrew Bible. The banner was presented at his tomb in Hillah, Iraq. The object may have been brought back by David Solomon Sassoon, a Jewish philanthropist and merchant.

An amulet is an object that is worn as a charm against evil or negative energy. According to the Tamlud (the Oral Law), an amulet was labelled ‘kame’ah’ or ‘to bind’. The hamsa, a hand shaped charm that symbolises the protective hand of God, is one of the most popular amulets. The hamsa often have a depiction of an eye, images of fish or inscriptions embedded in the palm of the hand.

What do we wonder

We might wonder what other shapes amulets can take? We might also wonder why this amulet was carried during pilgrimages?

The symbol of the palm of an open hand is found in Jewish, Christian and Islamic traditions and is often also known as the hand of Fatima or hand of Miriam. In Islamic folklore, the hand became an important symbol of faith when Fatima’s husband brought home a new wife. In her worried state, Fatima, who was cooking at the time, dropped the ladle she was cooking with and continued to stir the hot soup with her hand. This symbol found its way into the Sephardic Jewish Traditions which had been flourishing alongside Islam in the Mediterranean.

The hamsa is an important symbol in Jewish art and is often associated with Kabbalistic traditions. Kabbalists read the same Jewish texts and follow Jewish traditions but they have transformed these into a mystic ritual. Jews might have used the symbol to invoke the hand of god or to ward off evil eye.

This object may have been of interest to David Solomon Sassoon because of his family history and background. The Sassoon family were Baghdadi Jews, who moved to Mumbai, India. The Baghdadi Jews in India identify with Sephardic traditions and therefore this banner could have been of importance to the David Sassoon. It could also have been a reminder of his visit to Iraq in 1910 and the visit to the tomb of Prophet Ezekiel.