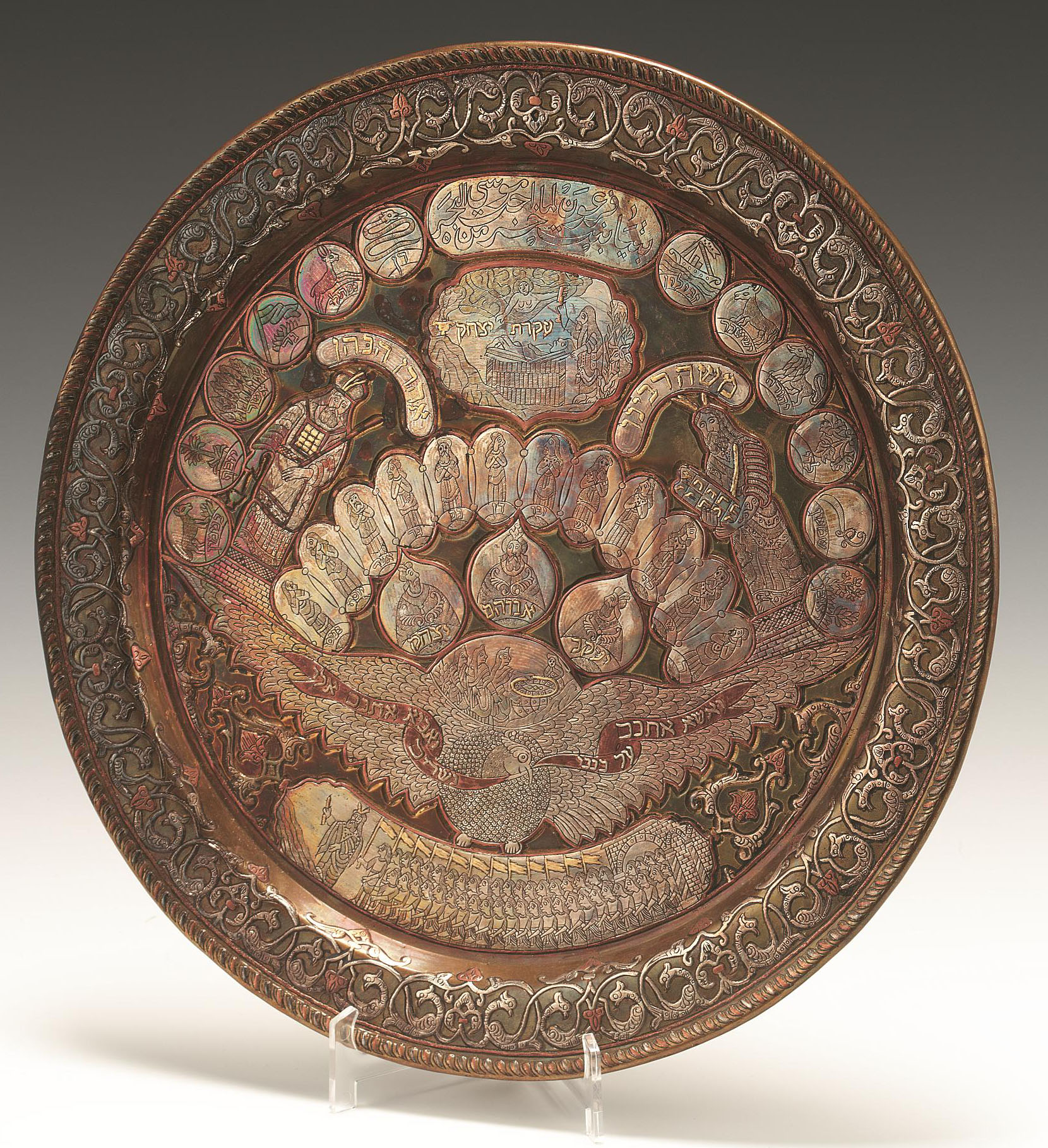 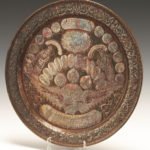 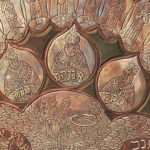 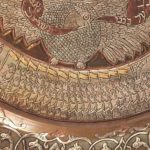 We can see 12 circular disks at the top of the plate. Each disk has a symbol inside. We can also see Hebrew inscriptions inside many of the disks on the plate.

This beautiful plate was used at the festival of Passover and includes biblical scenes and text in Hebrew and Arabic. This plate is full of images and symbols about the history of Judaism.

At the top of the Passover Plate is an image showing the story of Abraham ready to sacrifice his son Isaac just as God has asked him to. Zoom into the picture to see Isaac lying down and his father Abraham standing at his head. Above them appears the angel saying that God has asked them to stop. The Hebrew writing on this picture reads “The Binding of Isaac”. Above the image is a disk with Arabic written inside. The Arabic is also read right to left and says “The Binding of Ishmael” as in the religion of Islam is was the eldest son Ishmael instead of Isaac who was bound to the altar.

Look closely at the left hand side of the plate to see the image of Aaron; the first priest. Have you seen a Torah scroll? The Torah scroll is dressed and decorated in a similar way to how Aaron is dressed.  Look at the robe Aaron is wearing, it is similar to the cloth mantel that the Torah wears.  Look at the breastplate that Aaron is wearing, the Torah is decorated with a similar breastplate. Look at the bottom of Aaron’s robe to see the bells that are attached.  The Torah has bells on its crowns called rimmonim which look like pomegranates and that jingle when the Torah is moved.

Find the 12 circular discs at the top of the plate.  Each disc has a symbol inside.  These symbols represent the 12 sons of Jacob; a forefather in Judaism.  Remember Hebrew is read right to left so start at the lowest right hand side disc which shows the image for the son named Reuben.  After that is Simeon (sword), Levi, Judah (lion), Issacher, Zebulun (boat), Dan (snake), Naphtali (deer), Gad (camp), Asher, Joseph and Benjamin.  Under each disc are 12 pictures of men, these are the 12 sons again who became the 12 tribes of Israel.

Above the large bird there is a picture of the basket Moses was put into to be saved from drowning. The inscription in the bird reads: ‘and I carried you upon the wings of eagles, and I brought you unto me’. This is a quote from the book of Exodus which talks about how God saved the Hebrews from slavery. Beneath the bird we can see Moses with his staff leading the Hebrews out of Egypt before splitting the Red Sea.

We might wonder who was this plate made for? Why are there two different languages? Where did this plate come from?

Special plates like this one are used on the festival of Passover. Passover (or Pesach in Hebrew) is a week-long festival celebrated around March or April every year. Passover commemorates a very important story from the Torah.

The story of Passover starts with the Israelites as slaves to Pharaoh in Egypt. They were treated harshly by the Pharaoh. Pharaoh decided to try and reduce the number of Israelites by ordering for all Israelite boys to be thrown into the river Nile. However, one mother, Yocheved, saved her child by putting him in a basket made of reeds. He was found by the daughter of the Pharaoh, who called him Moses, and he was brought up in Pharaoh’s palace.

Moses knew he was an Israelite and was angry about the way Israelites were being treated. He ran away from the palace, and while he was in the desert God spoke to him and told him to tell Pharaoh to let the Israelites go. Pharaoh was unwilling to release the Israelites, so God sent 10 plagues to try to persuade him. The last plague was killing of the first born Egyptians. At this point Pharaoh decided to let the people go and God split the sea to allow the Israelites to escape to freedom.

To remember this story Jews have a special meal called a ‘seder’ (means ‘order’ in Hebrew) where they eat special symbolic foods which are put on a plate like this one. This includes bitter herbs to remember the suffering of slavery, and a sweet apple paste to remember the cement the Israelites used to build for Pharaoh.