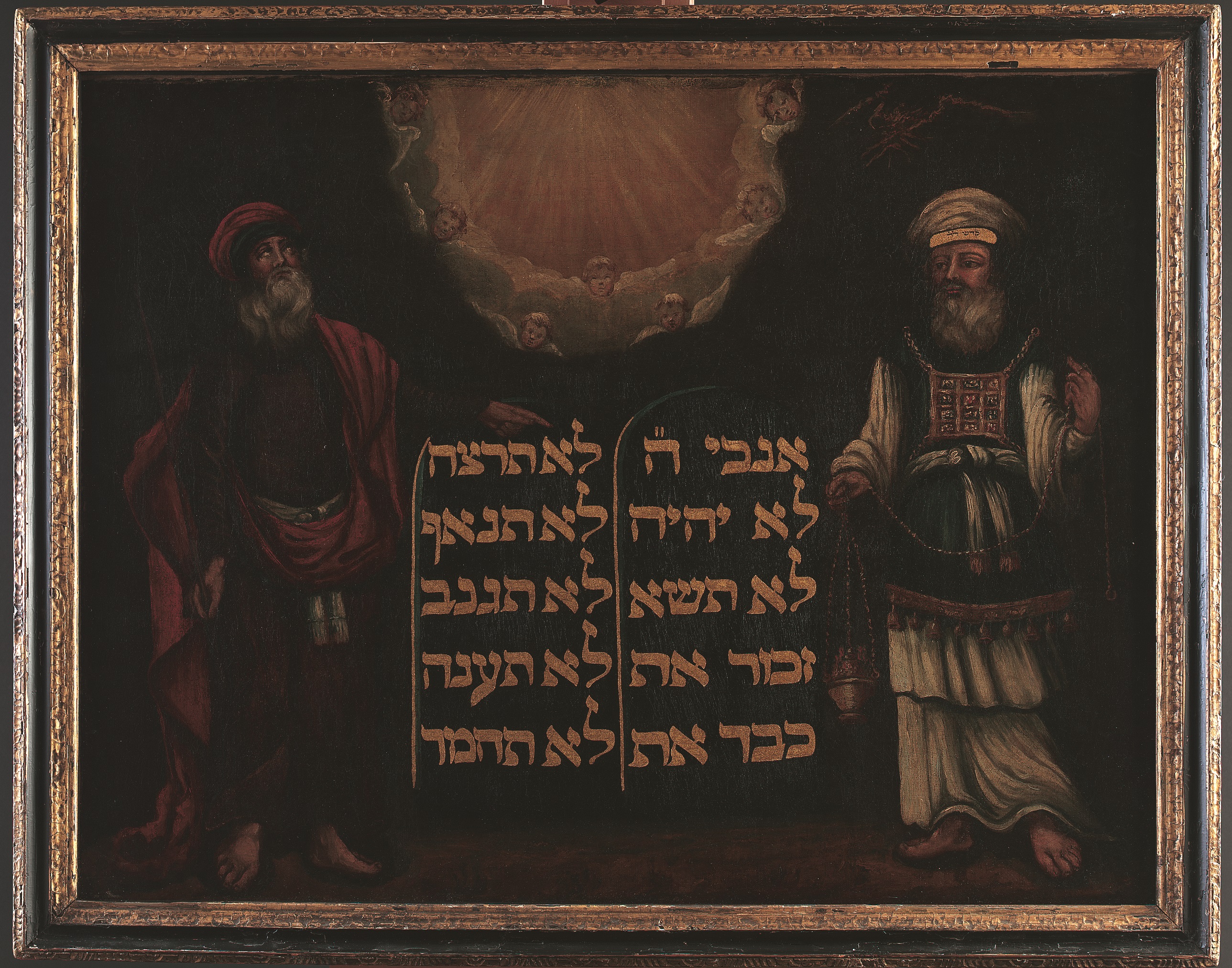 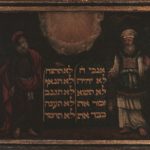 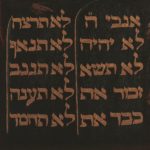 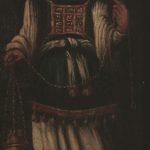 What can you see?

We can see see a tablet with golden Hebrew inscriptions. We can see a man on each side of the tablet. We can also see some angels above the tablet.

What do you know?

This painting shows Moses (left) and Aaron (right) standing next to the Ten Commandments, which God gave to Moses at Mount Sinai. Aaron was Moses’ brother and the first high priest in Judaism. Aaron is easily identifiable in this image because of the detailed description in the Torah of the priests’ clothing.

Priests were told to wear robes with bells and pomegranates, a jewelled breastplate, a head piece, a girdle, and carry a censer for incense. How many elements can of a Priests outfit are in this image of Aaron?

Notice how Aaron is looking at Moses, whilst Moses is looking to the upward towards the presence of God, shown as light and angels.

Look closely at Moses’ hand. What is he pointing to?

Aaron was the eldest son of Amram and Jochebed. He was born in Egypt three years before his brother Moses. He married Elisheba, and together they had four sons, Nabad, Abihu, Eleazar and Ithamar.

Aaron accepted God’s command to help his brother, Moses, to release the Jewish people from slavery in Egypt. Aaron was to be the “mouth” or “prophet” of Moses, he was to speak for him in front of Pharaoh and the Egyptians. He served as a mediator for the Jewish people. Aaron’s speeches to Pharaoh were reinforced by the miracles that he performed with his staff, changing it one time into a serpent and another into blossoms and almonds. Also, by stretching out his staff he brought on the first three plagues. Aaron was 83 years old when the Jewish people left Egypt.

However, Aaron and his sons were still chosen for the official priesthood. Though only Aaron was anointed with the holy oil, and therefore only he, the High Priest, was allowed to enter into the holy of Holies on the Day of Atonement (Yom Kippur) each year. God told Moses in huge detail how the High Priest should be dressed; “a breastplate, and an ephod (a sleeveless garment worn by Jewish priests), and a robe, and a embroidered coat, a mitre, and a girdle” (Exodus 28:4). Today there are no priests in Judaism, but the Torah scroll is dressed as priests in order to remember Aaron.