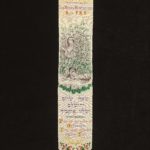 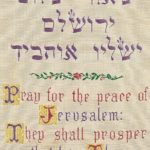 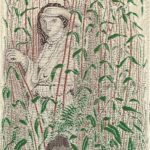 We can see an image of a woman woven on a bookmark. We can see purple writing in Hebrew and underneath we can see more writing in English which reads ‘Pray for the peace of Jerusalem: They shall prosper that love Thee.’

This bookmark commemorates the Hebrew Ladies Bazaar in 1875. This was a fundraising initiative established by the Jewish women of Sydney, Australia in order to raise money to contribute to the Great Synagogue building fund.

Look closely to see Miriam hiding looking over her baby brother Moses as he floats down the river Nile. Miriam helped to raise her brother while he grew up in Pharaoh’s palace.

Notice the expression on Miriam’s face. How might she be feeling?

Miriam is often recognised as the leader of the Jewish women as they left Egypt. After crossing the Red Sea Miriam led the women in a song and dance in praise of God. She also was responsible for providing the Israelites with water during their 40 year journey through the desert.

We might wonder what the Hebrew writing reads? We might also wonder what material the bookmark is made of?

Miriam was the daughter of Amram and Jochebed, the older sister of Aaron and Moses. She is one of the few women that the Bible calls a prophetess. Her mother gave birth to Moses after Pharaoh had given orders to kill every new-born Israelite boy. Jochebed put the child in a basket and placed him in the river Nile. Miriam watched the basket from a distance to see what would happen to the baby. When the Pharaoh’s daughter discovered the baby and decided to look after it, Miriam approached and asked if her mother could help raise the baby. Jochebed and Miriam were hired to nurse and take care of baby Moses.

When the Jewish People left Egypt, Miriam, with a timbrel (like a tambourine), led the women across the Red Sea in a procession of song and dance. Because of her association with water, both the Red Sea and the river Nile, God gave the gift of a well of water to the Israelites in the desert in honour of Miriam.

While in the desert Miriam and Aaron became dissatisfied with Moses, claiming that God not only spoke through Moses, but also through them. God called the three siblings to the Tabernacle, the portable dwelling place of God. God come down in a pillar of cloud and told Miriam and Aaron that prophets see God within a vision or a dream, but with Moses God speaks to him mouth to mouth. Angry with them, God turned Miriam into a leper. Miriam had to leave camp for seven days in order to restore her health. The Israelites waited for Miriam to get well before continuing their journey as the well of water would only follow them if Miriam was with them. When Miriam died at age 126, the well of water mysteriously dried up. Now the Israelites knew that it was for Miriam’s merit that the well was given.