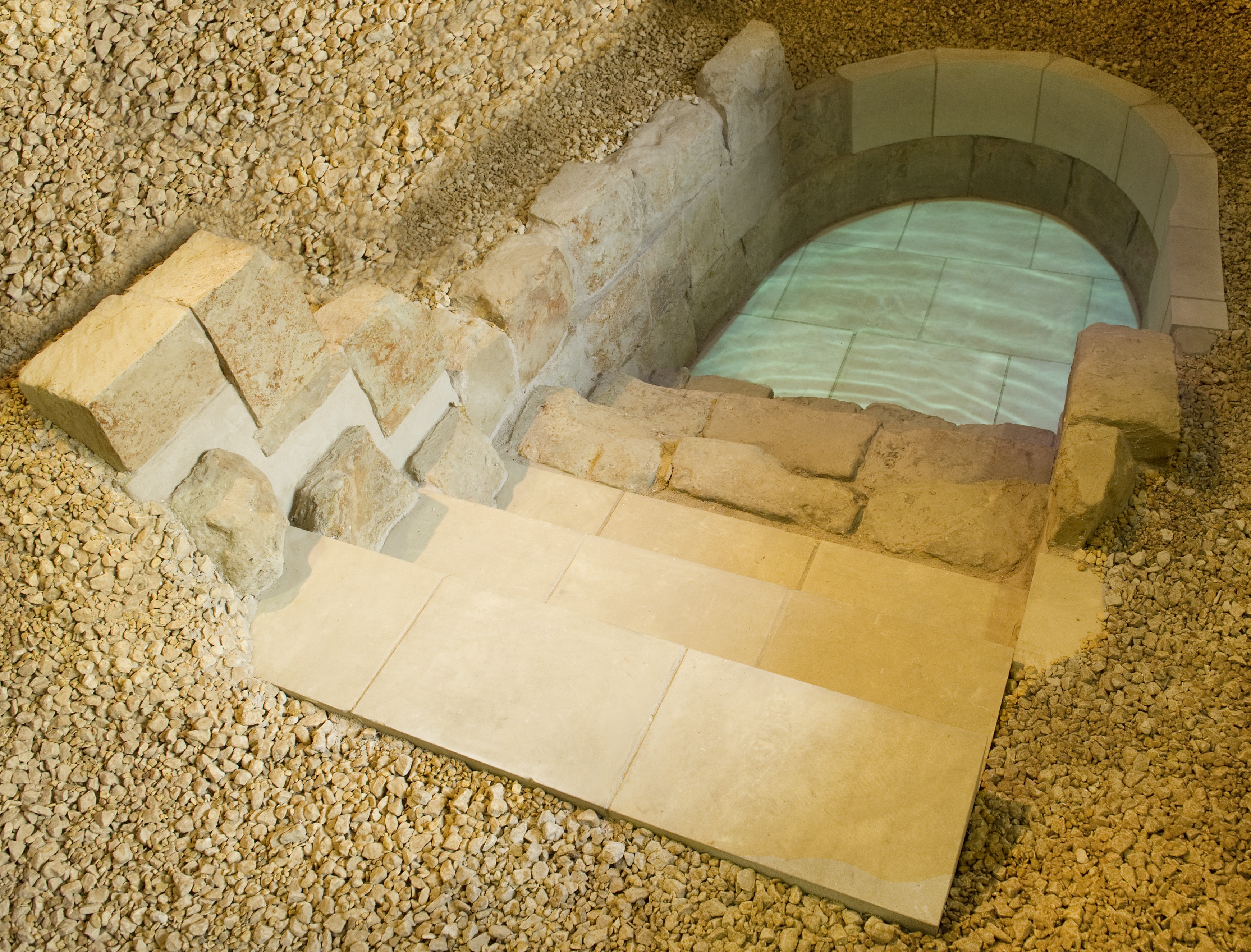 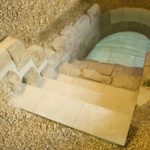 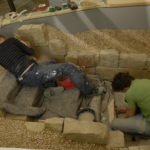 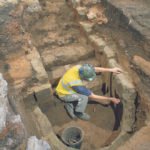 We can see three very old steps and three new ones. We can also see a space at the bottom where it looks like there is water. Look closely, what do you see?

This is a mikveh, a Jewish ritual bath. Can you see the steps leading down into a space at the bottom? This would have held water used for spiritual cleansing which users would walk down into using the steps. This mikveh is very old and is incomplete. It is likely it was much larger when it was in use, to allow the users to be fully submerged in water. The water in a mikveh must be from a natural source, such as rainwater or a spring. This mikveh was probably filled using cisterns of natural water which then flowed into the mikveh.

Dating from the mid-13th century, it is one of the oldest objects in the museum. This mikveh links the long history of Jewish people in Britain to a religious practice still shared by Jews around the world.

The mikveh was discovered on a building site in the City of London in 2001. It was built in the home of the Crespin family, members of the Jewish community that lived in the area during the medieval period. Archaeologists were originally unsure if this was a mikveh because it was not connected to a synagogue, but later found similar ‘cellar’ mikveot in Germany. When this mikveh was installed at the museum it had to be carefully done, brick by brick using tiny mortars. There are some spare bricks in storage that the archaeologists were unsure where they fit in the structure.

The Crespin family most likely came to England during the reign of William the Conqueror on the 11th century. In return for royal protection, Jewish people were very heavily taxed by the crown. During this time most Jews in the UK lived in a part of the City of London called the ‘Jewry’, where they largely worked as moneylenders and merchants. Jews were expelled from England in 1290 by King Edward I, including the Crespin family.

We might wonder who used this mikveh? We also might wonder how it was discovered? Who made it in the first place? How would it feel to walk into a mikveh? What do you wonder?

Size: 290cm front to back, 140cm at it widest point and top of the steps, 70cm deep at the bottom to the highest bit of wall.

On display in the Jewish Museum? Yes, on ground floor.

Mikveot (plural of mikveh) are used as a form of spiritual cleansing at various points in Jewish life. Traditionally mikveot are used most commonly by traditionally observant married women after their periods and the birth of a child. However, mikveot can also be used by any Jewish person before important events such as Shabbat (day of rest), Yom Kippur (Day of Atonement) and getting married. Some progressive Jewish groups have created new rituals using the mikveh to mark other important events or to signify a new start after pain or loss. Many Jewish groups see dipping in the mikveh as an essential part of converting to Judaism. Mikveot can also be used to ritually cleanse instruments used for cooking and eating.

The mitzvah (commandment) of being ritually cleansed in certain situations comes from the Torah, particularly from Leviticus. However, most of the rules concerning mikveot are found in the Mishnah and Talmud which explain rules about purity and impurity in detail. In Temple times issues of purity and impurity had wide-ranging implications for men and women as one had to be ritually pure to enter the Temple.

When people immerse in the mikveh they must enter it naked, without make-up, jewellery or anything which may act as a barrier between their bodies and the water.

The use of the mikveh for women in connection to menstruation and childbirth is controversial today. Some Jews argue this practice is based on sexist attitudes towards women’s bodies, others argue that the mikveh provides an opportunity for women to sanctify the physical phases of their bodies.