Make your own Latkes

Home » Assets » Make your own Latkes 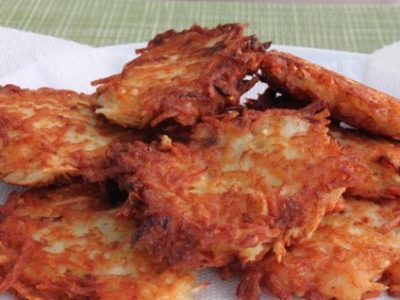 Latkes are fried potato pancakes traditionally eaten during the festival of Hanukah, the festival of lights. Hanukah remembers the story of the Maccabees. Over 2,000 years ago an evil King took over the temple in Jerusalem. The Maccabees fought against the king to reclaim the temple. When the Maccabees had won, they tried to relight the temple’s sacred Menorah. The Menorah was a seven branched candelabra which was meant to be kept alight at all times. When they tried to light the Menorah there was only enough oil to last for 1 day. However, a miracle happened and the small jar of oil lasted for 8 days and 8 nights. Today, Jewish people all over the world celebrate Hanukah by eating latkes and other foods fried in oil to remember this miracle.

Make your own Latkes