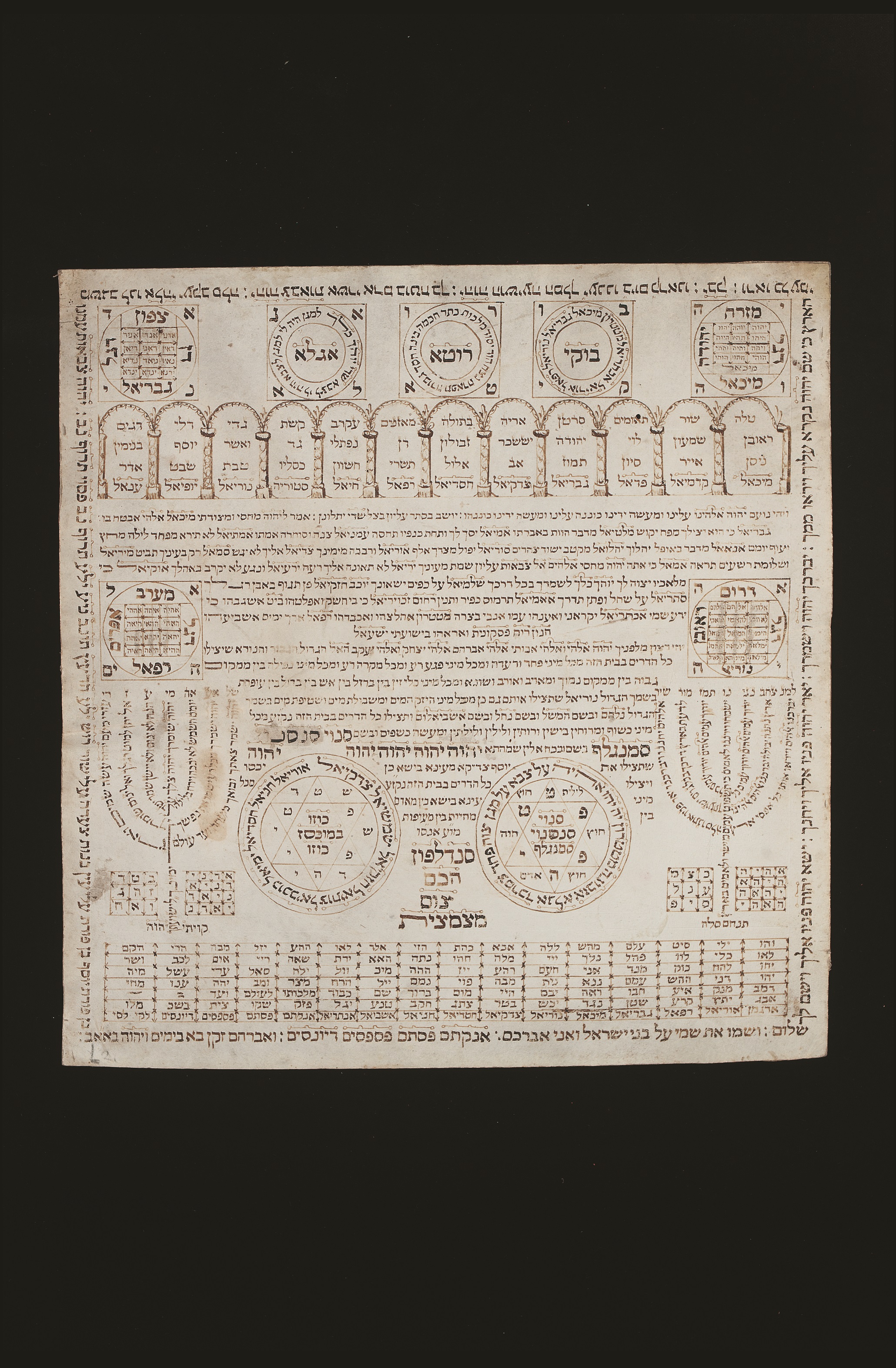 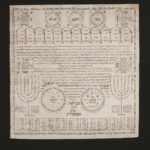 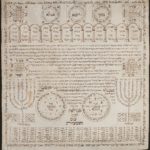 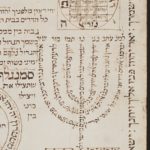 We know that this object is a Kabbalistic amulet or ‘kamea’ in Hebrew written by Hazan (Cantor) Isaac Almosnino in 1832. He made it as protection for his home. Hazan Isaac Almosnino was a well-known follower of the ancient spiritual wisdom of Kabbalah or what some might describe as Jewish mysticism.

This amulet was presented to the Jewish Museum London in 1938 by Haim Manuel Cansino, Esq., M.B.E. who was a communal leader from a wealthy Manchester Sephardi family. After World War II Haim Cansino moved to London where he and his relatives largely ran the Spanish and Portuguese Synagogue in Maida Vale. It remains unclear how the amulet changed hands from its writer Isaac Almosnino to the 1938 donor Haim Michael Cansino. However, we can assume a contact point within the Sephardic community of London.

The text of this amulet clearly refers to its purpose of protecting a house against all possible evils and bad influences. It contains verses of the Torah which are popular for protective purposes such as Psalm 91 and the Priestly Blessing which are also often found on amulets with origins in the East. The amulet also contains the Ben Porat-Prayer which is a classical Sephardi (Jewish communities who originate from Spain) charm against the Evil Eye. The lower part of the main text on the Amulet is flanked by magical letter squares, a device that uses Gematria (the practice of identifying the numerical value of Hebrew letters in order to reveal deeper meanings) and Shiviti amulets (the contemplation of G-d’s name in the shape of a Menorah). ‘Shiviti’ is first word in the Hebrew text of Psalms 16:8 meaning ‘I have placed’ and the complete verse means ‘I have placed the L-rd always before me’ and these are quite often found on Jewish amulets. Amulets originating from the east containing  similar magical squares, names of God and Shivitis are not particularly unique but they are not usually of such an enormous composition as this one. It is the structure and the compositions of different Kabbalistic elements that makes this object unusual and unique.

We might wonder if there are any similar amulets that exist like this one. We might also wonder how long it took to make the amulet.

The practice of Kabbalah is over one thousand years old. Kabbalah is a Hebrew word which literally means ‘that which is received.’ It is the study of how we receive fulfilment in our lives, how the universe works and what the meaning of life is. Kabbalists have been known to explore a plethora of ideas and practices such as meditation, reincarnation, belief in angels and demons, praying alone in nature, and ‘devakut’ or G-d consciousness (a state of being in which an individual is released from the confines of the ego identity, usually through ecstatic worship).The ancient practice of keeping amulets in order to protect oneself and one’s home from harm and misfortune, is common among those who follow Kabbalah.

Kabbalists read the same Jewish texts and practice the same Jewish rituals, but find different layers of meaning in them. Other important texts in Kabbalah are the Sefer Yetzirah (Book of Creation) and The Zohar. In Kabbalah there is the idea that G-d is not separate from anything, but everything gets a bit less Divine as they get further away from the source. Our material world is very far away from this Divine source, but there are still elements of it within our world. The universe contains spiritual rules as well as physical ones, and understanding these spiritual rules and how they interact and influence our lives is the purpose of the study of the wisdom of Kabbalah. According to Kabbalah, these spiritual rules influence us in greater ways than physical ones so the purpose of the study of Kabbalah is to fully understand how our world operates.