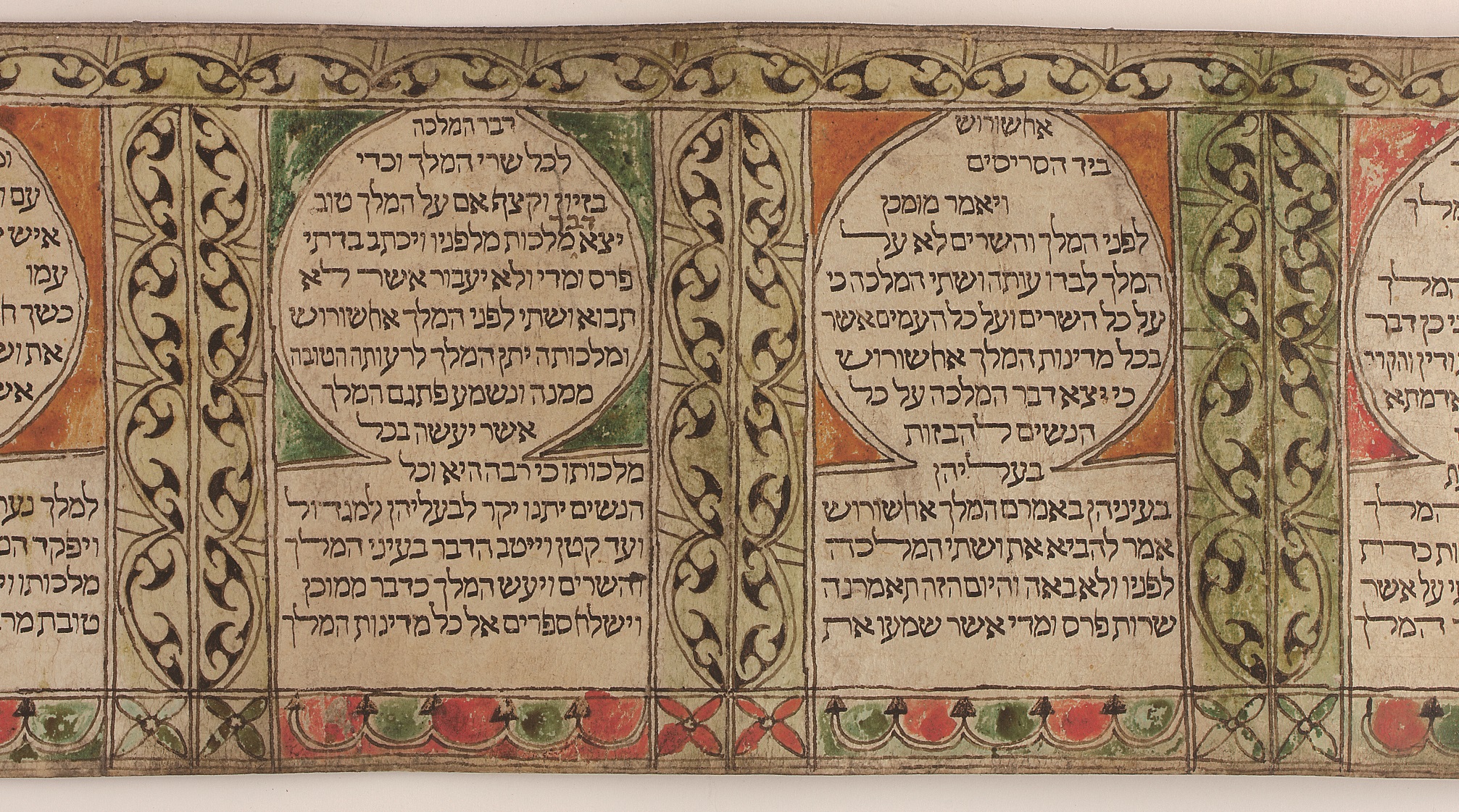 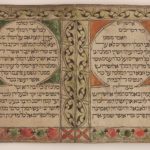 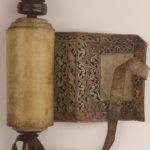 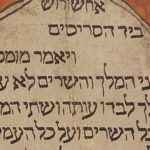 We can see Hebrew letters arranged in columns. We can also see curvy black lines surrounding each column.

This is a Megillah used during the festival of Purim. The festival of Purim is celebrated on the 14th of the Hebrew month of Adar, which usually falls in March or April. Purim celebrates how Queen Esther and her cousin Mordechai saved the Jewish people from persecution by Haman, the advisor to King Ahasuerus.

The story of Purim is told in the Book of Esther, called a Megillot Esther in Hebrew. This is the only story in the Hebrew Bible where God is not mentioned once. However, Jewish people believe that even though God was hidden, God was still present in the story. It is customary to celebrate Purim by dressing up in fancy dress costumes to hide yourself just as God is hidden in the Esther story.

This Megillah is handwritten in Hebrew on parchment, which is a special type of paper made from animal skin. The parchment is attached to a wooden roller with two leather tapes at the beginning to tie it open and closed. It is traditionally believed that the original Book of Esther was written by Esther and her cousin Mordecai. Because of this, it is often argued that Halacha, Jewish law, allows women to scribe the Megillah as well as men, even in some more traditional communities. Additionally, since God’s name is not mentioned in the Megillah, it is permissible for anyone to write and illustrate a Megillah, including women and children.

This Megillah is decorated in colourful arabesque designs, lines with many curves and turns. This style of art is popular in Islamic art. This Megillah is thought to come from either Morocco or Persia (modern day Iran).

The story of Purim tells how Queen Esther and her cousin Mordecai saved the Jewish people from persecution by Haman. Haman was the prime minister to King Ahasuerus and had persuaded the King to order the persecution of the Jewish people. Esther was married to the King, but he did not know that Esther was Jewish. Mordecai then persuaded Esther to tell the King that she was Jewish and convince him to spare the Jews. Esther was afraid to appear before the King without being summoned, but she did so anyway in order to try to save her people. Esther revealed her true identity to the King and managed to convince him that the Jewish people should be spared. King Ahasuerus accepted her request. Haman was sent to the gallows in place of the Jews, and Mordecai became the King’s new prime minister.

In honour of International Women’s Day, we have chosen to share this story of Esther and how her confidence and assertiveness to stand up for what she believed in eventually saved the Jewish people from persecution. Even though it took Esther’s confidence to stand up to the King, she could not have done so without the help of her cousin Mordecai or the King himself. This story demonstrates the importance of self-confidence, building relationships and collaborating and supporting with others.