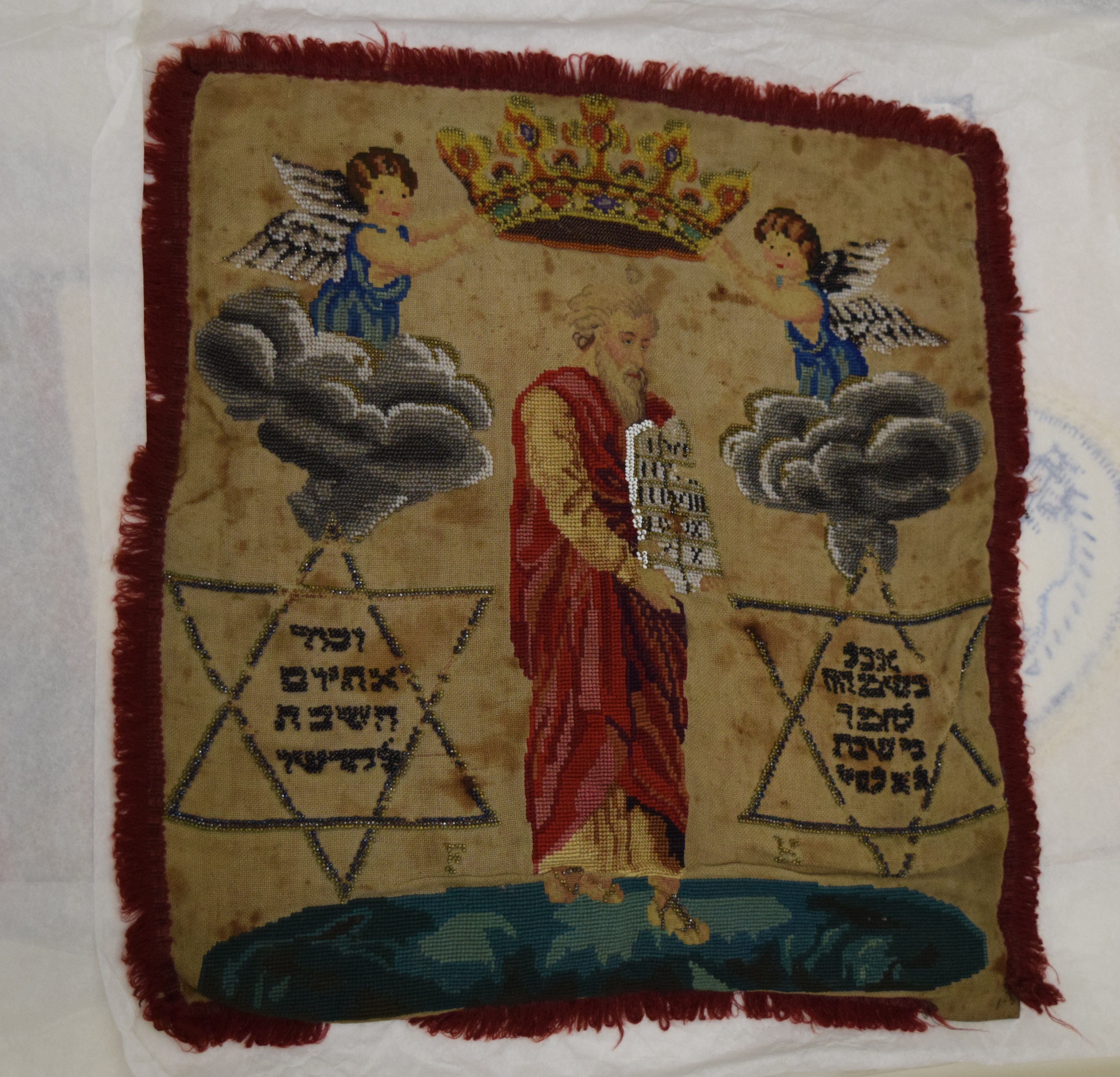 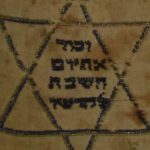 We can see a  challah cover showing the figure of Moses holding the Tablets of Law, flanked on either side with two angels holding the crown. Under the clouds are two Stars of David with verses in Hebrew related to the Sabbath.

This Challah Cover is used on Shabbat, the Jewish day of rest. The challah (bread) is covered with a decorative cloth until after the Kiddush blessings have been recited.

This Challah cover shows Moses carrying the Tablets of Law, which he carried down from Mount Sinai. Look closely to see the numbers 1-10 written on the Tablets, this is the number of laws or commandments given to the Jewish people. Keeping the Sabbath is the fourth commandment.

Look closely to see the two angels carrying a crown above Moses’ head.

Look at the two Stars of David. The Hebrew verses written inside refer to Shabbat.

Notice that the figure of Moses is standing in water. This could be a reference to Moses leading the Jewish people out of Egypt through the Red Sea.

Description: A challah cover showing the figure of Moses holding the Tablets of Law, flanked on either side with two angels holding the crown. Under the clouds are two Stars of David with verses in Hebrew related to the Sabbath.

Moses was a prophet in Judaism who led the Jewish people out of Egypt from slavery to freedom ion the book of Exodus in the Torah. A Prophet is someone who speaks on behalf of God, so Moses was the intermediary between the Jewish People and God.

According to the Torah, Moses was born in Egypt and was the son of Amram and Jocheved. He was the younger brother of Miriam and Aaron. At this time the Jewish people were slaves in Egypt, and the Pharaoh ordered all new born baby boys to be thrown into the river. However, Moses’ mother saved him by placing him in a basket and sending him down the river Nile. Moses was found and raised by Pharaoh’s Daughter Batyah. Upon learning that he was Jewish, Moses was so upset for his people that he killed one of Pharaoh’s guards. He fled to Midian where he became a shepherd and married a woman named Zipporah. They had two sons Gershom and Eliezer.

One day Moses saw a burning bush and knew this was a sign from God. God told him to return to Egypt to free the Jewish people. With God’s help Moses brought down ten plagues on Pharaoh and the Egyptians before Pharaoh finally said that the Jewish People could be free. As they left Egypt Moses, again with the help of God, parted the Red Sea allowing the Jewish People to cross safely into freedom.