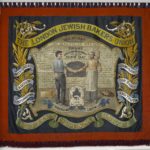 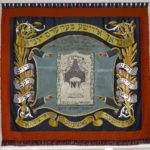 We can see two men shaking hands in front of an oven. We can also see the words ‘The London Jewish Bakers Union’.

This banner was made in 1925 by the London Jewish Bakers Union.  This Union was set up to fight for better working conditions for Jewish bakers. This object was made to remind shoppers to only buy bread with the union label on it as this guaranteed that it was baked under acceptable working conditions.  The banner is full of inspiring imagery and slogans.

There are lots of references to the baking trade on the banner.  There are wheat bales on either side of the banner, there is the baker himself, the bread paddle the baker is holding, the oven behind the two men, the bread of the floor, the words baker and bread have been used.  This makes the message the Union was trying to make very clear to shoppers.

Look closely at the Trade Union Stricker and at the words below it “Buy bread with the Union label”.  You may be able to see an image coming through from the other side.  The symbols you can see are in the Yiddish language.  This banner was designed to be seen from both the front and the reverse.   On the front the text is in English but on the reverse there is only Yiddish.  Yiddish is a language that most Jewish immigrants knew.   Many Jewish immigrants couldn’t speak or read English when they arrived in London so the banner had to have a language that all it’s shoppers could understand, that is why one side is English and one side is Yiddish.

We might wonder how long it took to make this banner? We might also wonder if this banner convinced many shoppers to only buy bread with a union label?

The London Jewish Baker’s Union began in 1905 and was the longest lived Jewish trade union, it closed in 1970.  The Trade Union was unhappy about how the bakers were treated by their employers, often working too many hours for very little money and often in dangerous conditions.  Some bakers worked for 27 hours in one stretch.  The bakers were mostly immigrants and were very poor.  200 members joined the London Baker’s Trade Union, nearly all of them lived or worked in Stepney.

The idea of buying food that has been made by people treated fairly is still around to day.  You will probably have seen fair-trade stickers on food in the supermarket, particularly on bananas.  The idea is the same, the sticker tells us that the people who farmed this food were treated fairly and paid fairly and were working in a safe environment.