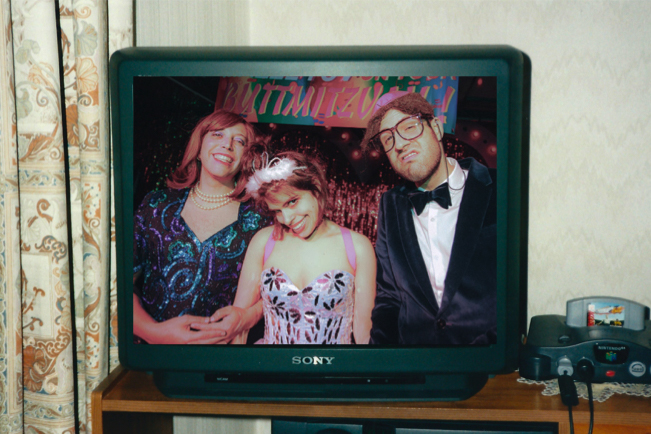 Join Borehamwood’s most shamelessly Jewish family, The Rimmers, for a preview their brand new short film Personal Shopping. The evening will also feature a screening of Cheap Philosophy, a short comedy about depression, failure and betrayal, made in 1993 with a borrowed video camera by artist-filmmaker Ruth Novaczek.

The screenings will be followed by a good old Jewish discussion (argument) on Jewish Queer identity, and a decent kiddush (mid-range fishballs guaranteed).

The Rimmers is supported using public funding through the Arts Council England.

The Rimmers is a collaborative project by Alex Eisenberg, Candy Gigi and Tom Joseph. Performing as a fictional Jewish family they make artist videos and performances which unapologetically put their Jewishness and queerness out in the open. Their work uses public interventions, humour and drag performance to expose the complexities of our identities, whilst also expressing a queer sort of fondness for our heritage. Since 2016 they have hosted the queer Jewish club and performance night Buttmitzvah. Alongside the events, they have created over 30 short videos which they have presented online.

Alex Eisenberg is an artist, curator and performer working with performance and video. He also works at Live Art Development Agency on curatorial and digital projects.

Tom Joseph is a screenwriter who has written a comedy feature for Sacha Baron Cohen and is currently writing a drama set in the ultra Orthodox Jewish community for Channel 4.

Ruth Novaczek is an artist and curator. She studied fine art film at St. Martins School of Art in London, and an MA in Fine Art, at Central St Martins in 2000. In 2015 she earned a practice-based PhD entitled ’21st Century Avant-Garde; New Vernaculars and Feminine Ecriture’ from the University of Westminster, London and is currently a Visiting Research Fellow at the University of Westminster. She has since been making film, performance and installation work that explores diaspora, gender, humour, sexuality, cinematic language and philosophy.

Stories from the Stores