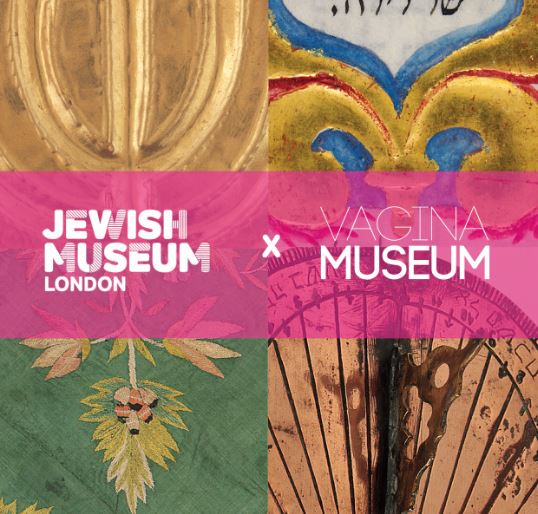 Taking a sledgehammer to the stigma and shame surrounding women’s anatomy and sexuality, The Vagina Museum and the Jewish Museum join forces to present a night dedicated to vaginas, vulvas and the gynaecological anatomy. Questioning traditional museum narratives, there will be workshops, pop-up exhibitions, curator talks and more to explore the power and wonder of the female body in Jewish culture and beyond. The Vagina Museum will be bringing a pop up exhibition called ‘Museum of Mankind’, a comedic parody of patriarchal practice in museums. There will also be workshops including, ‘Is my Vagina Normal?’ and a chance to make your own vagina inspired bunting!

Sip at a drink from our Cafe as you witness performances from critically acclaimed Comedian Candy Gigi as she stages excerpts from her one-woman, horror-comedy musical about a Jewish, sexually repressed, newly married maniac before you peruse a pop-up exhibition designed and curated by The Vagina Museum. You could even listen to our Curatorial experts on the presence and absence of the female body in the Collection and Jewish practise, or perhaps take part in a workshop with The Vagina Museum which will help sort the fact from the fiction when it comes to all you think you know about the female form. The evening is guaranteed to make you think, everyone is welcome.

The Jewish Museum London x Vagina Museum Late is a celebration of the female body in Jewish culture and beyond. Women’s bodies have been taboo in religion and culture for millennia and this event seeks to challenge this stigmatising narrative through humour. This event will feature curator talks throughout the evening on our medieval mikveh (Jewish ritual bathing pool) and how it has been used by women, and will delve into the presence and absence of women in Judaism and Jewish culture using our collection. The event explores traditional patriarchal museum narratives through satire, highlighting how the stories of men and male bodies have dominated museums. It will be taking every day female objects, and through interpretation, highlighting how female stories have so often been erased.

This event is part of Emerge Festival which will see a creative kaleidoscope of events spread across 11 London Boroughs in September.

Jewish Museum Curator talks on our medieval Mikveh and exploring the presence and absence of the female body in Judaism and Jewish culture will be from 6.30pm – 7pm and 7.30pm – 8pm.

Please be aware that admittance is only with an Emerge festival wristband, full details can be found here.

The Vagina Museum will host an exhibition and workshops.