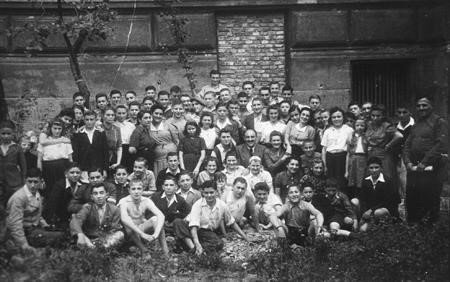 Today is International Children’s Day, which was first established in 1954 to promote international solidarity and awareness among children worldwide, and to improve children’s welfare. Thus, we want to share with you the remarkable story of the Windermere Children with the help of some photographs out of our collection.

By the end of the Second World War approximately 90 percent of Europe’s Jewish children were murdered in the Holocaust. But what happened to those who managed to survive? At first, the British government agreed to allow a small number of child survivors to enter the country. But, this was not enough for Leonardo G. Montefiore, the founder of the Central British Fund, who was still shocked by his visit to Paris where he had seen the first liberated camp survivors. He was able to persuade the British government to allow 1,000 displaced children under the age of 16 into the country. In the end, just 732 actually came to Britain. 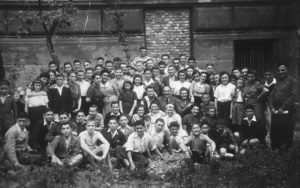 300 of the children had survived the ghetto “Theresienstadt” (Terezin) in the Czech Republic and were brought to Windermere. The presented picture shows some of the boys and girls after their liberation from the ghetto. As most of them did not have any sort of identification, many were older than 16 as the younger children had been mostly murdered upon their arrival to the camps as they were considered useless.

The CBF, which operates as World Jewish Relief today, was the key organisation overseeing the children‘s rescue. They provided everything the children would need, including the right staff to care for them. In August 1945, the children were brought from Prague to Crosby-on-Eden in Cumbria on British Bombers. The Windermere camp was led by the psychologist Dr. Oscar Friedman who was a Jewish refugee from Berlin himself. He strongly believed it would be possible to bring these traumatised children back into society. 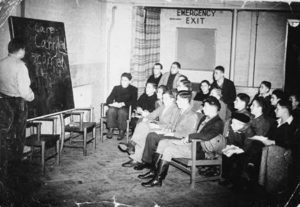 Windermere was a place where they were treated like human beings again. Sufficient amounts of food, clean clothes and a solid bed were just some of the many things the children had not have access to the past years. “[It was] the first time we got a meal on plates”, said Bernie Frydenberg, another of the survivors, who was held captive in Buchenwald.” I enjoyed it. It was the first time I slept under white sheets for nearly five years“, said Solomon Freiman, one of ”The Boys”. He escaped the Warsaw Ghetto where he had seen his closest family for the last time. He acquired most of the seen pictures. 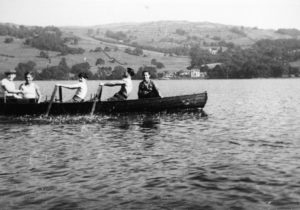 The camp offered education, training, language lessons, but mainly psychological assistance. Riding the bike, swimming in the lake or watching a film in the cinema were just a few activities, the children did. 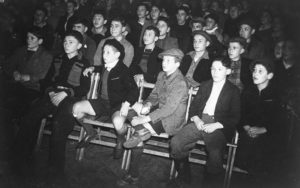 ”We tried to relive a little bit of our life“, said Sam Laskier, one of  ”The Boys” who had survived inter alia Buchenwald. The shown photos let us be part of some of those moments. We can see “The Boys” rowing a boat on Lake Widermere on a sunny day and watching “Henry VIII” completely thrilled. But, we can also see them receiving an English lesson, as they did not know English. Another picture is showing us some of the girls washing laundry, smiling at each other and talking with one another. 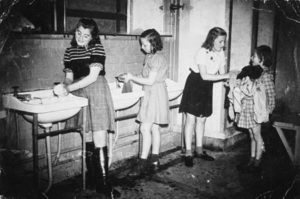 Camp Windermere was the start for the children to gain back a normal life and Dr. Friedman‘s strategy to make their stay as nice and uncomplicated as possible worked out. ”We had arrived in paradise”, said Icek Alterman. Icek had survived the concentration camps Auschwitz-Birkenau and Dachau.

”The Boys”, as they are being referred to today, stayed in Windermere for about three months. Some even reunited with parts of their family. Sadly, this was rather an exemption as mostly all their family members had been murdered in the War. Approximately half of the 732 children settled permanently in England. The others moved to Israel, the United States or Canada.

“The story didn’t end when they were liberated. I think that’s when the story began. About how they were able to build their lives and maintain friendships”, said Mark, the son of Bernie Frydenberg