Home » Refugee Week: Learning from the Past

Refugee Week: Learning from the Past 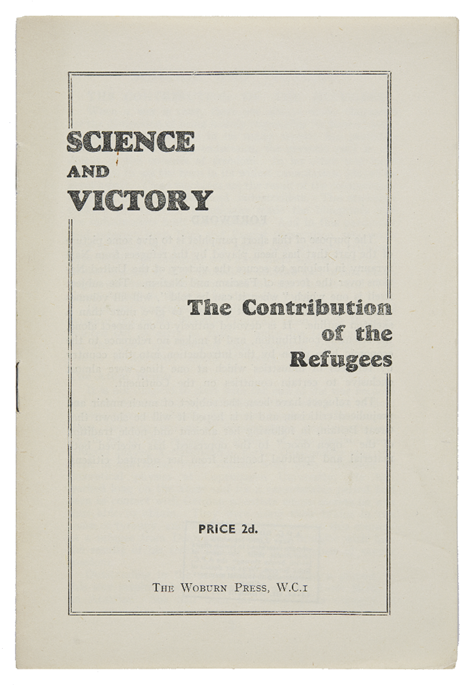 This week is Refugee Week: a week to celebrate the coming together and communication of different communities and create a culture of welcome – here in the UK and all over the world.

The topic is particularly poignant for many Jewish people. After all, the history of the Jewish community in the UK is one of migration. Our museum’s collection tells many of these migration stories. One object that has piqued my interest is this pamphlet published in 1946. It highlights the scientific contribution of refugees from Nazism – especially Jewish people – in the UK. 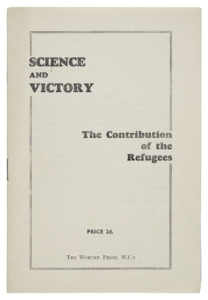 The author felt the need to remind UK citizens of the many achievements by refugees, indicating that the public opinion was rather negative. The pamphlet underlines the success of certain individuals, but it also makes note of the significance of every single refugee.

Interestingly, it states that, without the refugees, the Second World War could not have been won. The atom bomb, aircraft, ships, and smaller weaponry were only made possible or better thanks to the contribution of the many refugees. 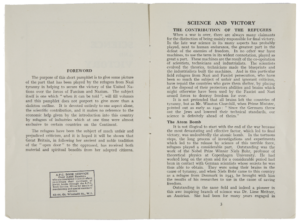 Niels Bohr, a physics Nobel Prize Winner from Denmark, for instance, was heavily involved in creating opportunities for refugee academics to continue their research.

Others, like the Drs Bergmann, Steiner and Weizmann developed means of feeding the population in wartime.
And production rates could not have been kept up without the manpower arriving from other countries.

Still, refugees were met with mistrust and reluctance, just as they have always been. These feelings were certainly present in 1290, when the Jewish community was expelled from England. But they did not disappear once Jewish people were readmitted to the country.

When Jewish people in Eastern Europe faced increasing discrimination and violence at the end of the 19th century, the UK was a relatively safe haven. However, this does not mean that refugees were welcomed with open arms.
Similarly, refugees arriving from Nazi-Germany or Nazi-occupied countries in the 1930s and 1940s were tolerated, but far from accepted. 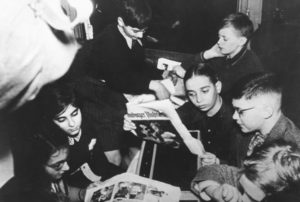 It is a difficult truth to face as, nowadays, Britain is often portrayed as a new home for refugees from the past. And while it was just that to many, the parallels between the past and the present can easily be overlooked. We can sense the same mistrust and reluctance today.

But if the past has proven one thing, it is that, in addition to obvious humanitarian reasons, there is also the need of countries like the UK for people to come here and contribute to its success – maybe even as big a need as that of the people arriving here.

There is still so much to do, to change, and what better time for a step towards acceptance than Refugee Week.