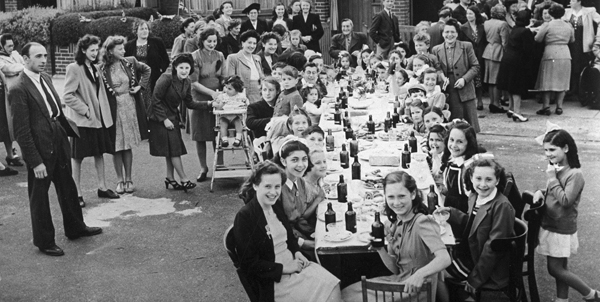 On 7 May, the German army surrendered to the Allies. This was the end of World War II in Europe. It was decided that Victory in Europe Day would be a national holiday to take place on 8 May.
People celebrated by decorating their neighbourhoods with colourful bunting and flags and organised bonfires, dances, parades, thanksgiving services and street parties. Pubs were filled with revellers. Churchill and the Royal family also made several appearances.

The atmosphere was mixed. On the one hand, people were joyous because the war was over. They ignored social conventions, embraced strangers, and danced and sang together. On the other hand, those who had lost loved ones in the conflict or who were worrying about the soldiers still fighting in the Pacific did not participate in the celebrations. They took the time to reflect.

This year’s VE Day celebrations were supposed to be special – after all, it is the 75th anniversary of the Allied victory in Europe. However, with the entire country on lockdown, events had to be cancelled or happen online. But even online, we can create a connection to the people who celebrated VE Day on 8 May 1945.
Eager to capture the moment, there were many photos taken. Some of them have found their way into our collection. They help us understand how the Jewish population in London experienced VE Day. 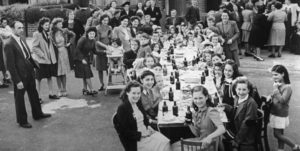 This photo shows a street party in Dollis Hill, London. The residents on the photo seem visibly relieved. However, it is also clear by the small percentage of men in the shot that most soldiers were not released from service until much later. 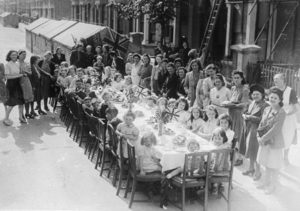 This photo shows children sitting around a large table in the middle of the street. Their happy, smiling faces are a contrast to the bomb shelters shown towards the back of the photo- a stark reminder of the difficult time these families have lived through. 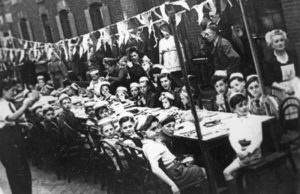 People in Batty Street, London, also organised street parties. This one was for the children of the area. They played music and danced – one of the neighbours even brought out a piano! 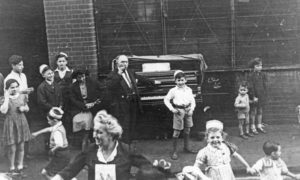 Maybe next year, we will be able to dance together on the streets again. But for now, let us commemorate VE Day from home. We can still come together spiritually and mentally. Because we have got a responsibility to maintain the peace that was achieved on this day 75 years ago.