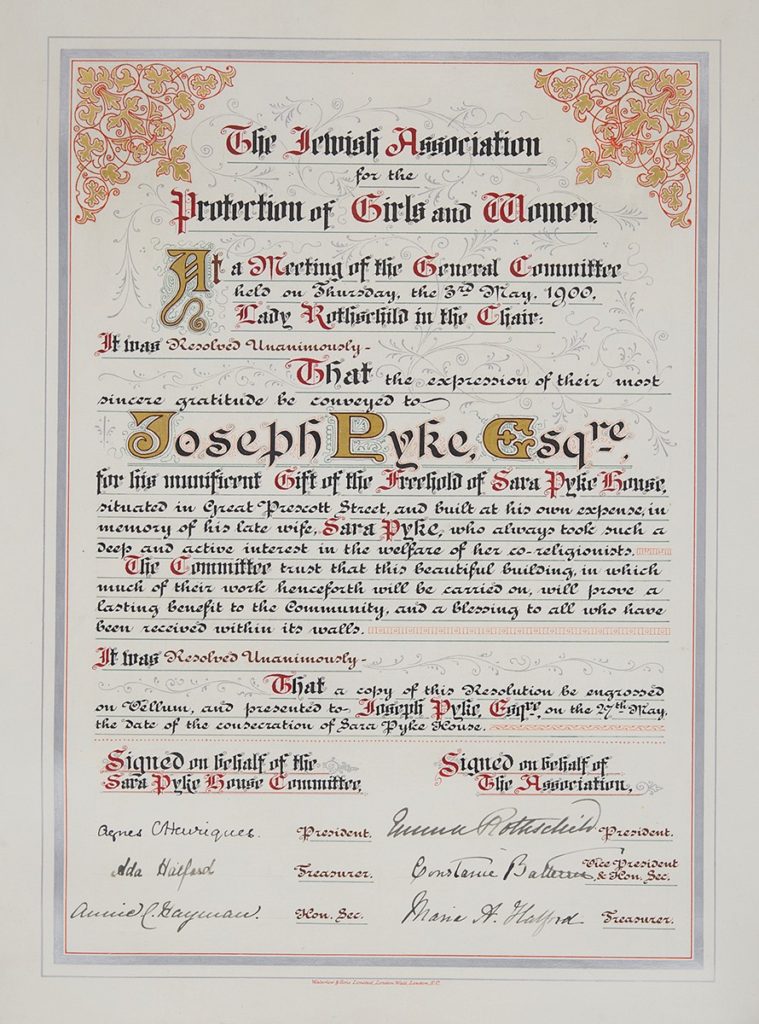 This post will look into one of the artifacts in the museum archive that links to the history of the anti-trafficking movement in London, Jewish women’s history and the complexities of these at the turn of the 20th century. 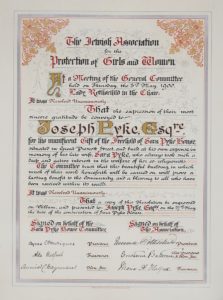 The document presents a letter of gratitude from The Jewish Association for the Protection of Girls and Women (JAPGW) to Joseph Pyke for gifting ‘Sara Pyke House’ to the organisation. The house was used as accommodation to rehabilitate girls and women and was later relocated to Highbury Quadrant in North London when more space was required

This presents several questions, the main one being, what was JAPGW and how was this property used by the organisation to tackle Jewish trafficking and its effects in London.

What was the Jewish Association for Protection of Girls and Women?

At the turn of the 20th century Jewish human trafficking was especially prominent in the crowded East London. With this came many ramifications including a fuel for further prejudice against Jewish immigrants, especially targeted at women.

The Jewish Association for the Protection of Girls and Women was led by the Anglo-Jewish elite as a way to carry out philanthropic work for Jewish women at risk of being trafficked into sex work, a large proportion of which were working class immigrants.

The JAPGW’s method of doing this was both preventative in accompanying young female Jewish immigrants it deemed at risk, and combative by providing accommodation such as the house listed in the letter of gratitude and rehabilitating the women by providing them with a number of skills to help them acclimatise to life in England.

It aimed to create ‘respectable English women’ through a moral education and training for an ‘honest employment’. After the woman were employed the association would send members to keep “a watchful eye” on them to make sure they didn’t become vulnerable to trafficking or sex work again.

Their work was not limited to England, they also carried out work in international Jewish campaigns against human trafficking in Argentina and Eastern Europe but it is unknown how successful this was.

Lady Battersea is one of the many Anglo-Jewish women in history who was invested in philanthropy.

The article below describes her as being instrumental in starting the JAPGW along with many other women including Mrs Nathaniel Cohen.

The property included in the letter of gratitude is described as being used as lodging and a rescue home called ‘Charcroft House’ and a ‘Training Home’ at Adeleide road in Chalk Farm are also mentioned. 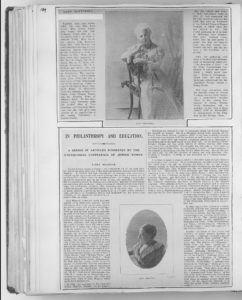 Battersea was heavily influenced by her mother in her philanthropic pursuits and set in motion the start ‘England’s first politically oriented Jewish feminist movement’.

Much of the documented Jewish Feminist movement is post-war, however, the Battersea’s accomplishments and work with the JAPGW could be seen as showing the beginning’s to this, considering her motives to aid women in independence.

The article below in the document seems to indicate she wasn’t alone in her pursuits as it writes about other women at the time who were also involved. Lady Battersea was committed to the JAPGW until her death when she left a donation to the association in her will as detailed below. 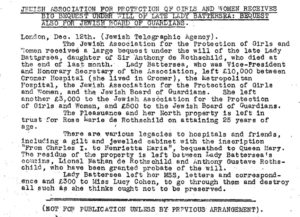 Implications of the organisation’s campaign against trafficking

Although the ambitions of the JAPGW were to help immigrants and women adapt to life in England safely and comfortably, new perspectives have been developed since then which shine a light on some of the negative consequences the association might have had on female Jewish immigrants in England at the time.

At the time the JAPGW was operating in the late 19th and early 20th century, there was much rhetoric around the concept of white slavery, especially painting female victims as a “naïve and innocent victim” or “a figure of injured innocence”.

Rather than having left home in search of independence and a better life the women were painted with fragility and naivety and therefore susceptible to being trafficked due to this nature.

There are examples of the recruited women’s inability to write English being seen as a symptom of mental deficiency rather than its being their second language.

This profiling added further stigmatisation to women who had immigrated to London in search of independence and engaged in sex work.

With the same brush it painted victims of sex trafficking as weak, putting the onus on them for the trafficking. Representing trafficking as a ‘self-instigated’ crime was not only detrimental to immigrants who had chosen to engage in sex work and to women who were supposedly ‘at risk’ but also to the portrayal of the victims of trafficking.

Through the distinction between the ‘naïve and weak women’ who had fallen victim who had fallen victim to the trafficking and the ‘respectable English woman’ the association sought to transform them into, they were portrayed as the ‘lesser than other’ in comparison to the anglicised Jewish elite who had led the campaign.

Rather than being empowered through independence they were being transformed into what was seen as a superior lifestyle.

The stereotype of the Jewish trafficker and the ‘contaminative and anti-national’ prostitute as a category was an early example of the racialisation of crime.

This caused a rise in the portrayal of Jewish immigrants as criminals through the semantics used in anti-immigration propaganda by journalists and politicians. This provided fuel to the backlash against the thousands of Polish and Russian Jews moving to the East End of London.

It propelled the idea of ‘Jewish Criminality’ in London and so the decision for the JAPGW to promote public awareness of the Jewish trafficking involvement was not one that was made lightly. They were well aware that making the campaign public would enable anti-Semites to further enflame the stereotyping of Jewish immigrants as criminals.

Despite this they went ahead with the mission and through the aforementioned stereotyping of female Jewish immigrants, they likely contributed to this form of racialisation of crime.

Although many of the issues mentioned still exist today, the flaws of the organisation were possibly symptomatic of their time and there has been much research and progression in the collective combating of human trafficking in all its forms.

There are several charitable Jewish organisations aiming to tackle human trafficking in such as the Religious Action Center of Reform Judaism which campaigns to bring awareness and education to interfaith communities as they aim to engage in and combat human trafficking by providing online resources.

T’ruah is a US based Jewish human rights organisation that ‘leads the charge in the Jewish community against modern-day slavery and human-trafficking’ with a focus on the food supply chain.

They partner with the Coalition of Immokalee workers and are a member of the ATEST group (the alliance to end slavery and trafficking).

They educate and train rabbis in preventing trafficking and provide educational resources on their website.

Questions to think about: