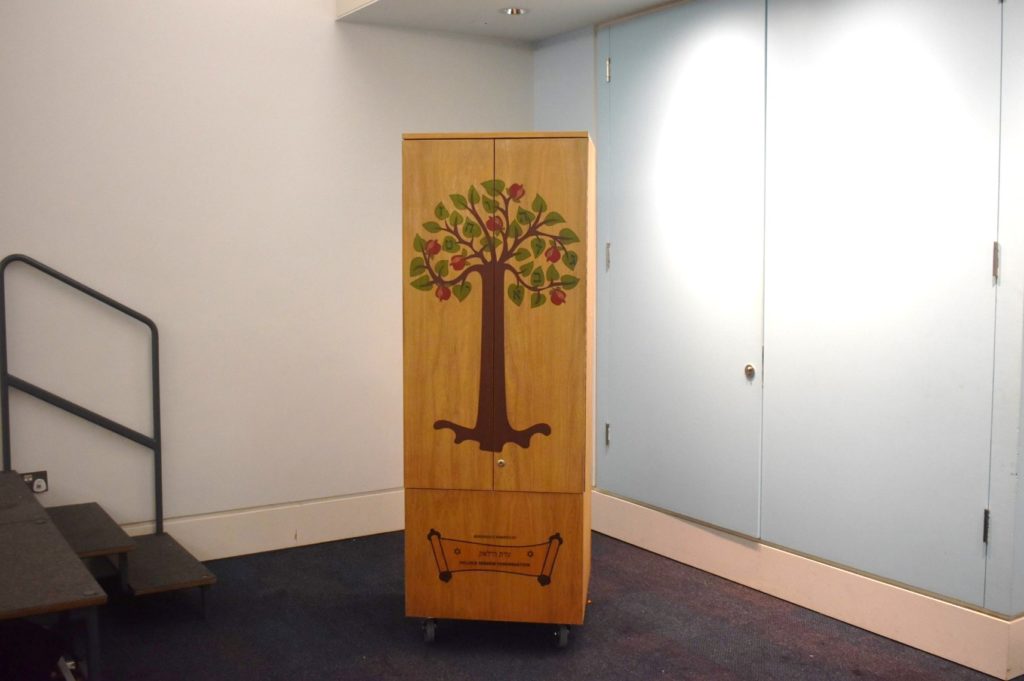 On 7 March 2017, a Torah along with a wooden Yad (pointer) was donated to the Jewish Museum’s Learning Team by the Hillock Hebrew Congregation in Manchester. The Torah was no longer able to be used in services and the congregation does not have the funds to ask a Sofer (trained Torah scribe) to repair the Torah any further.

The Torah is still in good condition as a whole and the congregation were very keen that it was used in an educational setting. I am pleased to say that it was donated specifically to the Learning team to be used as a learning tool in school workshops which means that school children are able to see a real Torah up close.

This meant the Learning Team needed to find a way to store the object, respectfully and protectively for when we use it in our workshops. So it was only fitting that we create an Ark (Aron Kodesh in Hebrew) in which to keep it, which is where it would be stored in a synagogue.

The project of designing and overseeing the building of this Ark for the Learning Torah was one of my first projects here at the Jewish Museum and one that was extremely rewarding to complete. 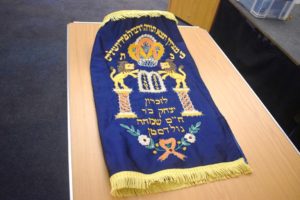 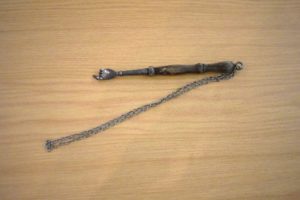 Above is a photo of the mantle from the Learning Torah.

On the mantle at the top it says: ‘For Torah shall come forth from Zion, The word of the LORD from Jerusalem’ (this is sung when the Torah is taken out of the ark in synagogue). This text comes from Micah 4:2/Isaiah 2:3 and it is the same text which is on our model Torahs’ mantles.

At the bottom it says: ‘to remember Yitzhak son of Rabbi Hayim Simcha Goldstein’.

I started the project in July 2018 by looking at what requirements the Ark would need.

It needed to be quite different from a regular ark as it would only be holding one Torah (and most arks usually hold multiple) plus it needed to fulfil certain criteria and perform specific functions conducive to being used in a learning workshop. Some examples of these criteria were:

So as you can imagine, it was becoming a very specific set of criteria. Unfortunately, some of the requirements on my initial list had to be scrapped due to practical reasons.

Items such as LED lighting inside the case that would turn on and off automatically when opening and closing the ark and having a pull out stand attached on which to rest the Torah when we take it out and show the students.

However, this did not in any way affect the reception of the finished product (in my opinion).

I also had to think about what the design on the front of the ark was going to be. I wanted it to show symbolism often used in Judaism; Tree of Life, Ten Commandments, maybe a couple of pomegranates and so on. I started to play around with some initial designs before sending them off to our wonderful designer.

What she came back with was better than I could have imagined and when the Learning Team had unanimously decided on a final design I started to become incredibly excited about my Ark. I also made sure there was a dedication to Hillock Hebrew Congregation on the Ark as well in order that they are recognised for their generous donation. 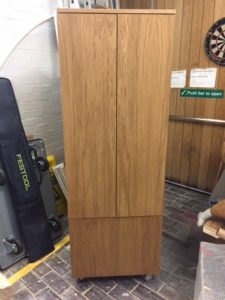 In January 2019 my Ark was finally completed and I couldn’t be happier with how it turned out.

It did turn out to be a slight logistical nightmare in terms of coordinating the finishing of the Ark and then getting the design vinyls fitted on the front, but was definitely worth the wait. Hooray!

When we show students the Torah in school workshops, we explain how we came to have it and they get a feeling for how a Torah is taken out of the Ark during a synagogue service; how it is treated with great respect like a King or a Queen.

This has become a huge highlight of our workshops and a moment that we hope many school children will always remember about their visit to the Jewish Museum, London. 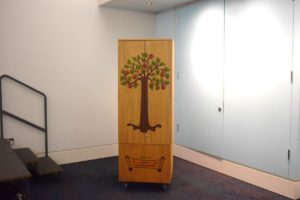 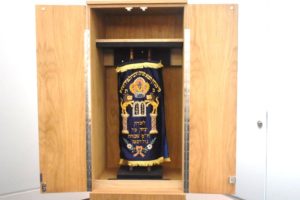