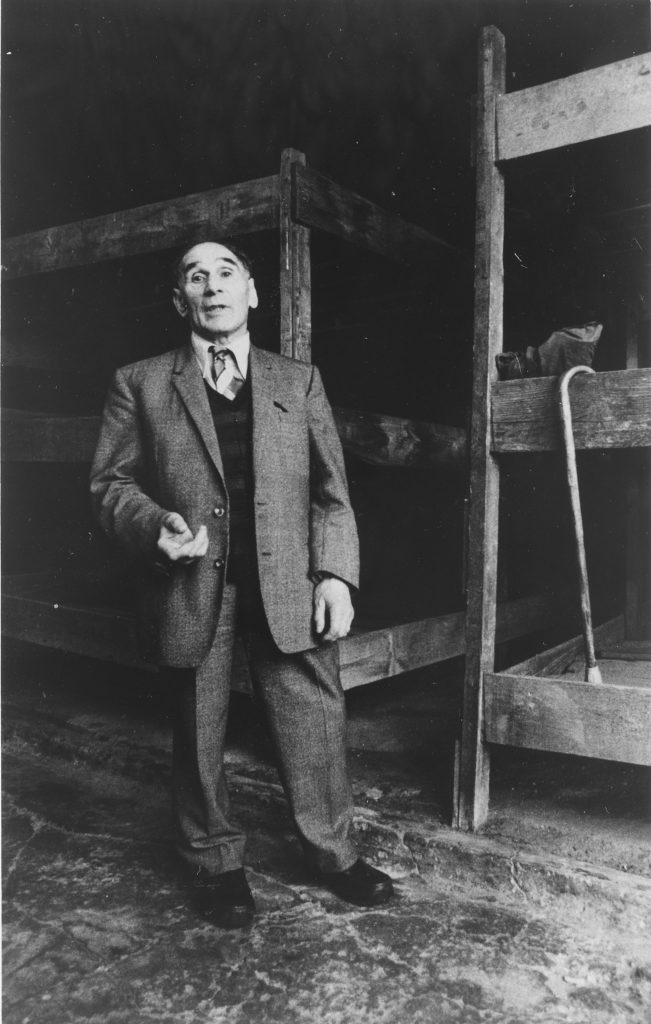 Leon Greenman during a visit to Auschwitz in the 1980s. Following his liberation Leon devoted his life to Holocaust education anti-racist activism. Object number: 1056.55

“I promised to tell the outside world of the evils of the Nazis so no further generation could repeat the mistake.”

The Jewish Museum London’s permanent Holocaust gallery has been telling the story of Leon Greenman story since 1996. Leon’s archive and personal artefacts are a visual testimony of lives altered and destroyed by the events of the Holocaust – everyday items that in our throwaway society would unlikely to have been kept. In Leon’s case, they were the only things he managed to retrieve and were a painful reminder of love, happiness, family, loss and trauma.

When he made his promise, Leon was lying in his bunk after arriving in Auschwitz Birkenau from Westerbork Camp. He was shocked into a horrific regime. He had been forcibly separated from his wife Else and their two year old son Barney. This was the beginning of 18 months of camp life. Selections, hard labour, hunger, weakness, illnesses and fear. Leon endured the infamous death march in January 1945 and ended up in Buchenwald where he was liberated. His wife Else and son Barney had been murdered straight after waving goodbye on that bitterly cold January day in 1943.

Leon kept his promise and started speaking about his experiences immediately and continued to speak out until his death in 2008. The BBC interviewed him in 1945 and the Jewish Museum has the record of this particular interview that was never broadcast. To date, it might be the earliest known English spoken testimony.

Other survivor stories are highlighted in the Holocaust Gallery through testimony films. Some of the people interviewed have passed away and their stories live on in our galleries and through the thousands of people they have inspired through their lectures:

Solly Irving a young boy when war broke out. He spoke about the terrible dilemma of having to leave his sister behind, in order to survive. When lecturing, Solly always stood behind a chair, using it as a barrier and a grip to hold on to as he bore witness. It was not easy for him, but he felt he owed it to his father whose last words to him had been ‘to try and stay alive’.

Jack Kagan, who as a young boy had escaped a labour camp by tunnelling his way out with other prisoners and joined the Jewish partisans deep in the woods of Eastern Europe. Jack Kagan’s groundbreaking research after the war and his tenacity and drive to erect one of the first memorials to Jewish victims in Soviet-dominated territory is a lasting legacy.

Josef  Perl was willing to help out a few times when we were developing our speakers’ programme. The few times turned into more than ten years. Ten years of bearing witness. In his talks, Josef painted a beautiful picture of his early childhood. Describing a life of mutual respect, tolerance and coexistence before the Holocaust wiped out these vibrant communities.

I have been fortunate enough to have worked with Leon, Solly, Jack and Josef intensely for 15 years. They became dear friends who were part of important milestones in my personal life, Each had an enormous impact and I often think about them and will continue to tell their stories.

As we are speeding towards a time where the Holocaust will disappear from living memory the responsibility to continue to teach the history of the Holocaust through personal recollections and to commemorate through Holocaust Memorial Day becomes all the more poignant.

Here at the museum, we held an official Holocaust Memorial Day event on the evening of 24 January. This event saw Kindertransport survivors Ann and Bob Kirk, and survivor of the Genocide of the Tutsi in Rwanda Eric Murangwa, give their testimonies. Following this was a lighting of our yahrzeit (memorial) candle, led by the Mayor of Camden. The event was BSL interpreted by Peter Abraham.

On Sunday 27 January, the museum offered free entry between 10am-2pm to all visitors. The day saw Artist in Residence, Tom Berry, working live in the lower gallery. His current piece is inspired by one of the Kinder, Bea Green, who features in our Remembering the Kindertransport: 80 Years on exhibition. Upstairs, our assistant curator, Jemima Jarman, delivered a sold-out tour of Roman Vishniac Rediscovered in Yiddish.

Posted in Museum news by Thamar Barnett on January 31st, 2019.