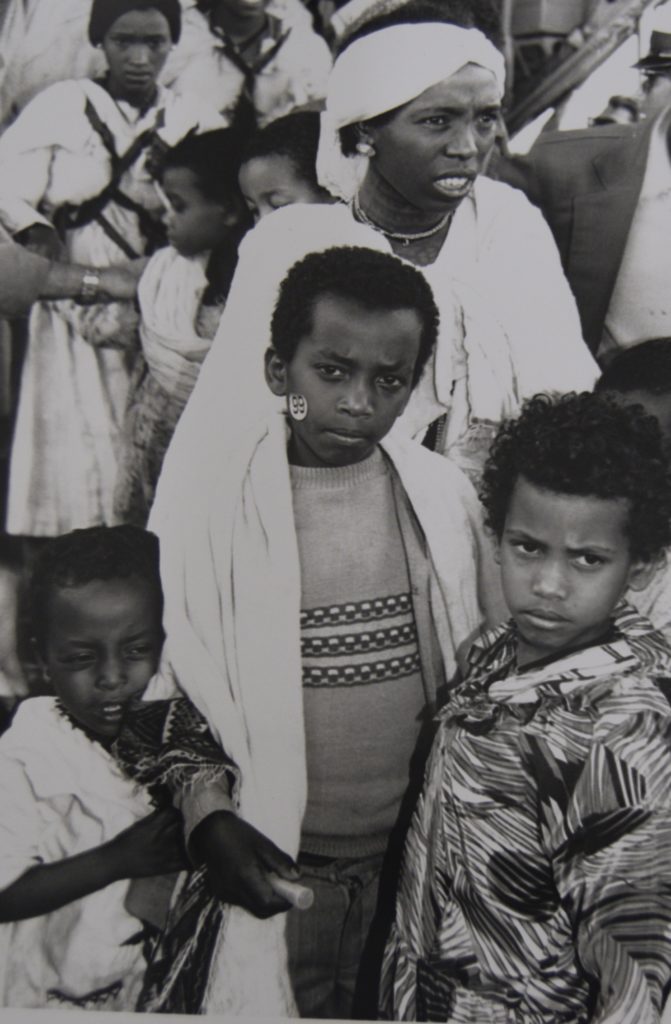 The month of October has been established as Black History month since 1986. In its 31st year, the Jewish Museum is focusing on a few objects from its collection in a series of blog posts and in tours throughout the month focused on race in religion and race in holy scriptures, objects and stories. One of them is the story of Operation Solomon.

On the 24th of May 1991, a Guinness world record was broken for the most passengers on an aircraft ever. The record was broken during a daring Israeli operation, the evacuation of Ethiopian Jews from Addis Ababa, Ethiopia. This operation called Operation Solomon continued non-stop for 36 hours and included 34 jumbo jets of the Israeli air force, hundreds of soldiers and the evacuation of 14,200 Jews to their promised land.

So how did this incredible operation happen? And who are the Ethiopian Jews? 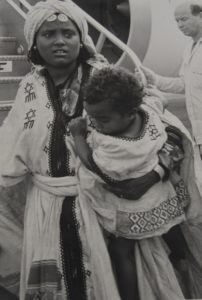 Starting from the beginning, a Jewish community had been established in Ethiopia sometime after the destruction of the first temple in around 587 BCE. The origin of the Ethiopian Jews is unclear though most believe that they are the descendants of King Solomon and Queen Sheba. There are many theories though, some believing they are the lost tribe of Dan, while others believe they are the descendants of Christians who converted to Judaism. Throughout its history, the community has been referred to by numerous names like ‘’Falasha’’ which means ‘’stranger’’ which shows how their Christian neighbours viewed them as strangers in their land and ‘’Beta Israel’’ which literally means ‘’house of Israel’’. This name shows the community’s own deep connection to the Torah and their faith.

The Beta Israel exodus to Israel began in the early 1980s, after a coup in the Ethiopian government led to the death of 2500 Jews, directly followed by Ethiopia forbidding the practice of Judaism and the teaching of Hebrew. This was the start of various operations conducted by Israel to rescue the Beta Israel community. In the beginning, Aliyah (Hebrew for ascending, immigrating to Israel) activists and Mossad agents operating in Sudan called the Jews to come to Sudan and informed them that from Sudan via Europe they would be taken to Israel. Posing as Christian Ethiopian refugees from the Ethiopian Civil War, Jews began to arrive in the refugee camps in Sudan and were taken to Israel. Later on, Ethiopia’s fragile government forbade the immigration, and the rest of the operations had to be conducted in secret.

In 1991, Ethiopia was coming to the end of the long civil war and the government was close to toppling. The political and economic stability of Ethiopia deteriorated, with rebels mounting attacks against and eventually controlling the capital city of Addis Ababa. Worried about the fate of Beta Israel during this transition period, the Israeli government decided to launch their largest operation yet, and so on May 24th and 25th the Ethiopian Jews that had safely reached Addis Ababa after a long and dangerous journey in the Ethiopian desert were taken to the 35 aircraft that awaited them.  In order to accommodate as many people as possible, aeroplanes were stripped of their seats and up to 1,122 passengers were boarded on a single plane (the flight that broke the world’s record). Many of the immigrants came with nothing except their clothes and cooking instruments and were met by ambulances, with 140 passengers receiving medical care on the tarmac. Two pregnant women gave birth on the plane, and they and their babies were rushed to the hospital.

The operation was considered a major success and the Israeli government was happy to call the operation an achievement.  However, for most of the members of the community adjusting to Israeli society hasn’t been easy. In the beginning, the new arrivals spent between 6 months and two years in absorption centres learning Hebrew, and the Beta Israel community hasn’t always been treated as equals in Israel society. The community suffered from discrimination and have had an overall uneasy integration process with the people of Israel.

Today, the situation can be described as complicated. The operation is still considered by most as a major success and the majority of the Beta Israel community has fully immersed itself in Israeli culture and life, though, despite progress, discrimination in Israel is still perpetuated.  In May 2015 exactly 24 years after the operation was completed, Israeli Ethiopians demonstrated in Tel Aviv and Jerusalem against racism and discrimination.

Even now, almost everywhere in the world, we are hearing about immigration stories.  Through the sharing of stories. we are starting to truly understand the immigrant’s struggle, the hardships that come from immigrating to a different country not knowing the language, and the hardships with limited employment opportunities. We can only hope, that Israel, a country that was founded by immigrants and refugees, will continue to improve with the rest of the world, and never forget where they and their ancestors started as well.