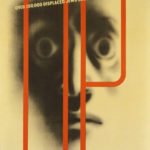 Thank you to Hi Lo Magazine for this feature on our brand new exhibition!

Official War Artist, graphic designer, illustrator: Abram Games had it all.  See it at the exhibition of his life and works at the Jewish Museum London.

Abram Games was one of the most important and influential figures of 20th century graphic design. Celebrating the 100th anniversary of his birth, this exhibition will explore his immigrant roots, his Jewish background and his enormous contribution to British design.

Designing the 20th Century: Life and Work of Abram Games is being curated in conjunction with Games’ children, Naomi and Daniel who are allowing the Museum access to the family archives and working with us to portray the true Abram Games.

Born the day after WW1 broke out, Games was a child of immigrant Jewish parents living in the East End. He started his career as a freelance artist, producing posters for clients such as London Transport, before becoming an official war poster artist during World War II, designing 100 posters. His iconic posters for campaigns such as ATS recruitment and wartime safety used simple and often stark images and clear typography to convey strong messages, and to create images which remain powerful today.

Games’ Jewish identity was incredibly important to him, once stating that “I feel intensely Jewish. It has contributed to the character of my work”. Games produced a huge amount of work for Jewish organizations and Jewish causes, mostly carrying out this work for free.

His post-war career was hugely successful – designing posters and emblems for an array of important British institutions, commercial companies and charities including the BBC and the Olympic Games, and the logo for the Festival of Britain. As well as graphics, Games designed objects including a coffee maker and a copying machine for the manufacturers Gestetner. He was awarded the OBE in 1958 and appointed a Royal Designer for Industry in 1959.