A reflection on my time at the Jewish Museum

In April 2013, as part of my Masters Degree program, I was required to undertake a three month work placement. As per the format of the course, I wrote applications to three very different institutions, which were then given to my supervisor, who would select a position based on my preferences and her academic guidance. So when my supervisor selected a placement in the Curatorial Department at the Jewish Museum, I was immediately suspicious of her reasoning. I confronted her, and my questions were met with a decidedly vague “most suitable applicant for the opportunity”. But in my mind, I knew the real reason. She had clearly ignored all my academic interests and focused on one tiny part of my application: the part where I said I was Jewish.

Why did I say that, I wondered to myself? Why did I think that would help my cause? I felt as if I was being shipped off to some far away island, and when I got there everyone would realise that I was completely and utterly unprepared. Soon they would discover that they had made a horrible mistake, and in no way was I suitable for the position. I wasn’t even really Jewish… 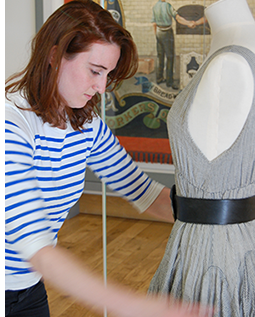 Except that I am. Ethnically and culturally, but not religiously Jewish. My mother’s family emigrated from the USSR to the United States in the mid 60s. At some point between then and marrying my father, she converted to Christianity, but the family was already rooted in a considerably established Jewish neighbourhood just outside of Boston, and this was where I grew up. I spent Passovers with other people’s families, made hamentaschen and kugel on weekends, and feasted on mysteriously labelled chocolates brought over from friends’ parents’ trips to Israel. I attended a constant stream of bar and bat mitzvahs, knew more Rachels and Sarahs than I could count on two hands, and was keenly aware than when discussing neighbourhood gossip, one had to preface whether you were talking about the Weintraubs who lived on Summit Ave., or the Weintraubs who lived on Beacon Street.

Yet I always felt a certain amount of guilt about not being Jewish enough. I never attended Hebrew school, and to this day the only letters I recognize are those on a dreidel. I can remember nothing after “Baruch ata Adonai, Eloheynu…”, which seems even a bit much for who has never read anything from the Torah. Affectionately called the “goy” of my friendship group, no matter how often I pointed out that actually, technically I was Jewish, I was always identified (by others, to be clear) as part of the gentile minority at school, and in the larger community.

When my family moved to Britain after I finished high school, I again found myself in the minority, but for the opposite reasons. I was the only Jew in my extended social group, indeed for some of my peers I was the first Jew they had ever met. Suggestions of lox and bagels for lunch were met with blank stares, and my occasional Yiddish outbursts met no recognition. No one understood when I was tired from schlepping across London, or when never-ending queues were acknowledged with an exasperated “Oy gevalt!” Suddenly, all those cultural and social aspects of my Jewish identity, which I had always taken for granted, were drifting away. I felt the need to try and immerse myself in the community where I had previously been an outsider. So when the opportunity to be involved with a Jewish Museum arose, I grasped for it with everything I had. Including, so I thought, my greatest trick of all: I was Jewish. Yet my elation at the potential of being part of that world would quickly be crushed, or so I believed, by my own self-deceit. I could never be a part of that community. I was only pretending. I wasn’t really Jewish.

What started as a three month work placement grew into over a year-long internship, fully out of my own choice, and the infallible support of the Curatorial team. Far from the exclusive, traditional clique I feared, I was welcomed by a socially, politically and religiously diverse group of people whom I feel so privileged to have worked with. I have been a part of many incredible projects during my time here, from Amy Winehouse and Four Four Jew, to fascinating research for new and upcoming exhibitions yet to be publicly announced. But perhaps the important and personal lesson I’ve learned is what it means to be Jewish. It’s not about whether you’ve been to temple, or observe Shabbat. You don’t have to keep Kosher, or be fluent in Hebrew. Scholars and academics will argue the finer points of what it means to be one of “the chosen people” for the next eternity, but it won’t matter to me. I am Jewish, and that’s it. It means whatever you want it to be.