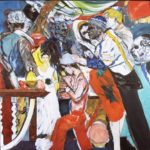 Two exhibitions of late artist R.B. Kitaj are on view at the Pallant House Gallery in Chichester and the Jewish Museum in London’s Camden town.

They were recently reviewed in The Economist in an article that recounts Kitaj’s life and work as exemplified through these two exhibitions. It also makes mention of the painting pictured above, identifying the figures and themes featured in this elaborate work:

“In ‘The Wedding’ (pictured), completed in 1993, Kitaj himself, wearing the yarmulka, dances with his wife at their wedding surrounded by his best man, David Hockney, and their Jewish friends—Lucian Freud, Frank Auerbach and Leon Kossoff—whom he had dubbed the School of London.” — The Economist, March 2013

Read the article in its entirety here.